E. coli, the notorious bug associated with severe food poisoning and usually caught from undercooked meat, is a common concern for anyone cooking over the festive period.

While thoroughly cooking meat and washing vegetables and hands after food preparation can prevent E. coli infection, treatment for the severe stomach bug can be difficult, as antibiotics are known to make the disease worse by releasing a potent toxin into the infected person’s gut. 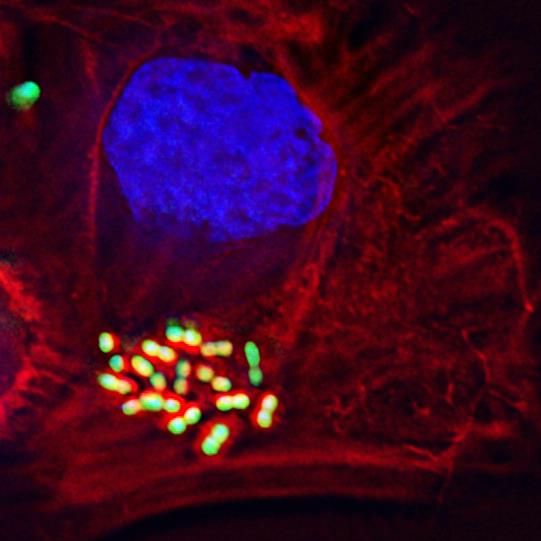 Now, scientists from the University of Glasgow have found a product made by natural soil-living bacteria that can successfully treat E. coli O157 – [one of] the most serious types of the bug – without producing any serious side effects.

The new study, published in Infection and Immunity, found that Aurodox, a compound first discovered in 1973 but found to be poorly active as a true antibiotic, was able to successfully block E. coli O157 infections.

Scotland has one of the highest incidences of E. coli O157 in the world, and almost half of O157 cases in Scotland are in children under 16 years of age.

The Aurodox compound was able to reduce the ability of E. coli O157 to bind to human cells and, unlike traditional antibiotics, did not cause the release of potent toxins. The researchers believe that this compound could be used as a promising future treatment of E. coli O157 infections.

Professor Andrew Roe, Professor of Molecular Microbiology and lead author of the paper, said: “E. coli O157  is a potentially fatal bacteria bug that currently is not recommened for treatment with antibiotics. We were excited to find that Aurodox was able to prevent the E. coli bacteria from binding to human cells and effectively act as a potent disease-blocking compound.

“Our results are encouraging and suggest that this compound could be used as a promising anti-virulence therapy for the treatment of these infections.”

E. coli O157 causes diarrhoea, stomach cramps and occasionally fever. Symptoms may last up to 14 days, however the bacteria can still be present for longer than this. Some people who are infected show no symptoms, while others go on to develop very serious complications, which can sometimes be fatal. Young children are at higher risk of E. coli infection and, along with older adults, are at greater risk of serious complications.

The paper, ‘Characterisation of the mode of action of Aurodox, a Type III Secretion System inhibitor from Streptomyces goldiniensis’ is published in Infection and Immunity. The work was funded by the Biotechnology and Biological Sciences Research Council (BBSRC) and was performed in collaboration with the University of Strathclyde.