The University of Glasgow has won a top award at Glasgow’s 2017 Global Game Changers Awards, held last night in Glasgow. 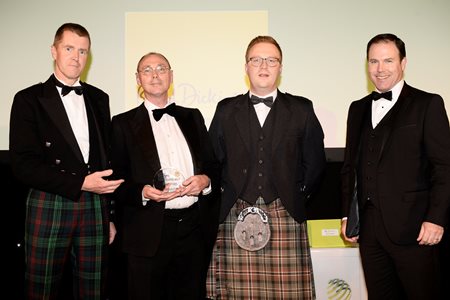 The inaugural awards, sponsored by Innovators Magazine in partnership with The Herald, were launched to recognise the innovation economy’s importance in delivery a sustainable future for all.

The University of Glasgow, led by the College of Medical, Veterinary and Life Sciences (MVLS) won the Collaboration for Change Award, which recognises the College’s role in transforming healthcare innovation through the development and implementation of precision medicine, an emerging approach which enables doctors and researchers to identify and develop treatments that are effective for specific groups of patients.

“The University of Glasgow's collaboration with industry at the QEUH has created a focal point for the implementation of precision medicine in Scotland. We hope this has created a lasting legacy for Glasgow through global reputation, significant economic development and inward investment to the City, and ultimately will, we believe, improve the health of patients in Scotland and beyond by the development of new and more effective treatments.”

The University’s achievements at the QEUH in partnership with industry include the creation of the new Clinical Innovation Zone (CIZ) at the QEUH, which includes 22,000 sq ft of dedicated space for companies to engage with academia and industry.

As well as this, the 2017 opening of the Imaging Centre of Excellence (ICE) at the QEUH is a £32m development that incorporates Scotland's only 7T MRI scanner and future plans include developing the UK’s largest Molecular Pathology Node at the QEUH in Glasgow. Funded by the Medical Research Council, the Node is working with industry partners and the NHS to develop new tests to better diagnose patients and guide their best treatment in cancer, inflammatory diseases and in cardiovascular and metabolic diseases.

The entire ICE development was funded externally (including £16M from Glasgow City Region City Deal) and will create almost 400 highly skilled jobs in Glasgow, attracting talent from academia and industry.

The entire academic infrastructure to facilitate innovation at the QEUH now totals £80M, and has been independently estimated to achieve a GVA exceeding £100m.

The win comes just a week after the University, also led by MVLS, won the Innovations and Business Award at the Inspiring City Awards for its outstanding contribution to encourage, inspire and foster business growth and development in the city of Glasgow.