The archive catalogue, which is funded by Wellcome, came about after the re-discovery of the Alexander Haddow collection by senior archivists last year. The emergence of Zika in late 2015 highlighted the fact that the virus was originally discovered by UofG alumnus Alexander Haddow. Since then, this archive collection has been in high demand by both academics and the media. 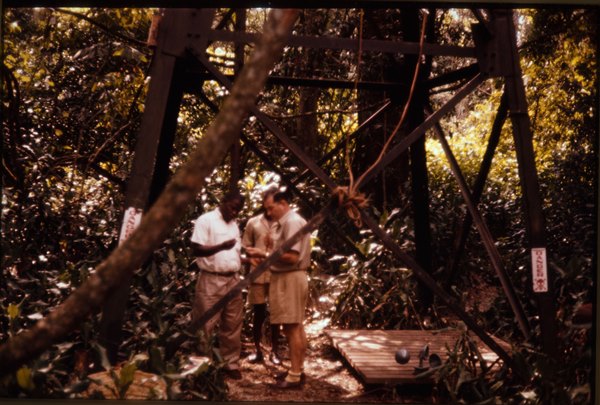 Last night’s launch event in the University library was hosted by Vice-Principal and Clerk of Senate, John Briggs, and the Chancellor, Sir Kenneth Calman, who was also a friend of Alexander Haddow. Also in attendance were members of the Haddow Family, including David Haddow, Alexander Haddow’s son.

The event not only celebrated the launch of the catalogue, which is now more accessible to researchers, but also recognised the role of research collaboration through the generations and the University’s ongoing position at the forefront of Zika virus .

Dr Claire Donald, member of the Kohl Group at the University’s Centre for Virus Research (CVR), reflected on the University’s role at the forefront of Zika virus research and on the international collaboration to fight the virus today, which is, of course Alexander Haddow’s legacy.

University librarian Susan Ashworth said: “We are delighted that members of the Haddow Family were able to attend the launch of the University’s Alexander Haddow Zika Archive Catalogue.

“The catalogue launch is itself the culmination of almost two years’ work, when reports in early 2016 prompted identification of the Zika-related material in the archive. It’s a wonderful achievement for the staff involved in this project to see this material come full circle in this way, ensuring future users the chance to discover the collection’s full research potential.”

David Haddow, Professor Haddow’s son who attended the event, said: “I was delighted to attend the launch of my father’s archive catalogue. Living with him was like living with an intellectual giant - his achievements, his attention to detail, his fastidious attitude to all his work - he was an inspiration.

“For me personally my father’s legacy was my education, but for others it will be his pioneering Zika and virus research work. I am extremely proud that the university has created this catalogue of his work.”

Alexander Haddow was an alumnus and professor at the University of Glasgow. Born in Glasgow in 1912, he made his career as a distinguished medical entomologist and researcher in the field of insect-borne diseases. Professor Haddow was primarily renowned for his studies of the mosquitoes that spread Yellow Fever, but his research team also discovered several previously unknown viruses including Zika, Bunyamwera, O’nyong-nyong and Chikungunya.

The majority of Haddow’s research career was spent in Entebbe, Uganda, at what is now known as the Uganda Virus Research Institute, being Director of the Institute from 1953 until 1965.

The scientific materials in the archive show results from Haddow’s experiments, which mainly involved catching mosquitoes in the forest in order to determine where and when different species were active.

These mosquitoes were often used to attempt to isolate viruses, particularly Yellow Fever, but also any unknown viruses. Haddow’s research materials and annual reports cover the first isolation of the Zika virus from Aedes africanus mosquitoes, caught in the Zika forest in 1948.

It is clear that the Zika virus was not considered to be a research priority at the time, as it was not known to cause serious disease or to spread rapidly. However, one message that has been clearly illustrated by the story of Zika is that while scientific work does not always have any obvious importance at the time it is carried out, the research data produced can prove vital in the future.

The project has been funded by Wellcome, which awards grants to libraries and archives to support cataloguing, preservation and digitisation projects, underpinning research in the history of medicine, medical humanities and social science by making collections more easily accessible to researcher communities, including historians, humanities scholars, social scientists and those working in broadcast media.