Social scientists from universities in the USA and Scotland have carried out ground-breaking analysis of the benefits of providing off-grid solar power to rural communities in India.

Almost a quarter billion people in India alone and about another 600 million in sub-Saharan Africa are without access to electricity because of the high cost of extending the electricity grid to remote, rural places. However, with a rapid decrease in the cost of solar panels, interest has grown in the use of off-grid solar power as an alternative, especially since solar power is cleaner than fossil fuels. 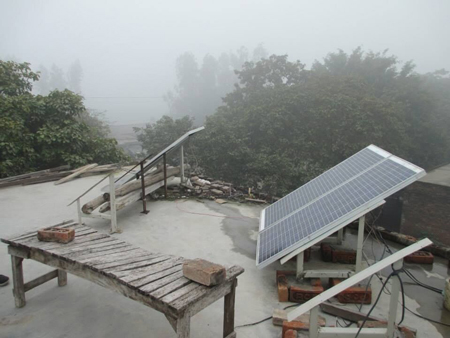 The academics worked in partnership with an Indian solar service provider, Mera Gao Power (MGP), to conduct the first randomised controlled trial designed to measure the causal effects of installing solar microgrids in 81 non-electrified villages in Barabanki district of the state of Uttar Pradesh in India. Households in these villages previously had no electricity and used simple kerosene lamps to light their homes.

“When we visited the villages, we found that most households had no modern lighting at all,” Dr Johannes Urpelainen from Columbia University notes. “These villages were in the dark after sunset because India’s rural electrification program had not reached them.”

The team of four academics from the University of Pittsburgh, New York University, and Columbia University in the US and the University of Glasgow in Scotland found that the villagers spent considerably less money on buying kerosene for lighting their homes after subscribing to the MGP service: however, they also found no evidence of broader socio-economic impacts on household savings, expenditures, local business creation, how much time women spent on productive work, or children’s use of lighting to study.

"MGP's customers replaced kerosene lamps with solar lighting, but they didn't save money or find new ways to earn it," says Dr Patrick Bayer from the University of Glasgow. "Basic energy access, which essentially provides bright lights and mobile charging, was not enough to unlock economic opportunity."

According to Dr Michaël Aklin from the University of Pittsburgh, “the findings underscore both the potential and limitations of providing minimal electricity access through off-grid solar power. It is notable that an inexpensive, business-driven intervention without any state subsidies can have such a positive effect on the quality of lighting in previously non-electrified villages. Because MGP offers electricity at night, the service serves households at hours when demand peaks and electricity access is generally the weakest.”

Dr Bayer added: “At the same time, the lack of broader effects, aside from better lighting and lower kerosene expenditures, underscores the limits of minimal solar microgrids. Electrification programs that rely on off-grid technologies must consider the trade-offs between the complexity, the costs and the benefits of these systems. Our findings do not imply that larger systems cannot produce broader socio-economic benefits, but generating such benefits may require more expensive solutions.”

The team randomly assigned 81 small rural habitations into treatment and control groups. In the treatment groups, MGP approached villagers and offered to set up a solar microgrid if at least 10 households within the village subscribed at the monthly per-household cost of 100 rupees (£1.21/$1.67). MGP made no intervention in the control group.

The solar microgrid offered a basic level of electricity access comprising high-quality domestic lighting (through two LED lights) and mobile charging. Information on fuel expenditures, lighting hours, quality of lighting and broader socio-economic effects was collected from 1281 households surveyed on three occasions over a period of more than a year: prior to treatment, half a year after treatment, and one year after treatment.