Apple CEO Tim Cook has been conferred an honorary Doctorate of Science at a ceremony in the University’s Bute Hall before a capacity audience of students and staff.

After a question and answer session and a "fireside chat",  he later tweeted that he was “humbled and honoured to become part of the @UofGlasgow community” and thanked “the faculty and students of this great university”. 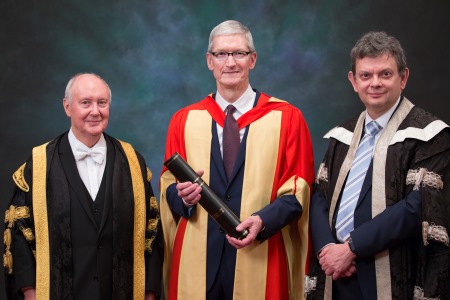 This is the first time Tim has accepted an honorary degree from a UK university.

In a question and answer session with the audience, Tim singled out for praise the University’s expertise in Precision Medicine. He had earlier visited the Imaging Centre of Excellence and the Teaching and Learning Centre at the Queen Elizabeth University Hospital, meeting Professor Dame Anna Dominiczak, Vice-Principal and Head of the College of Medical, Veterinary and Life Sciences; Dr Carol Clugston, Chief Operating Officer of the College of MVLS; Dr David Sibbald, Chair of the Stratified Medicine Scotland Innovation Centre; and Dr Diane Harbison, CEO of the Stratified Medicine Scotland Innovation Centre. 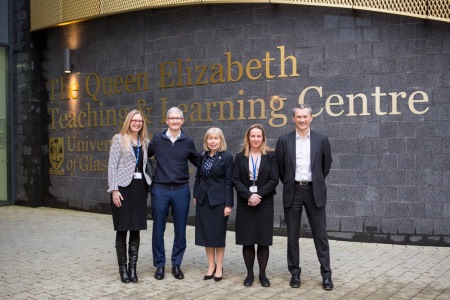 Tim said: “Scotland has a health system which is rich with data, built from 45 years of tracking the health not just of individuals but of families. When you couple that with sequencing, imaging and health tracking technology like the Apple Watch, it’s possible to get a much closer view of the relationship between cause and effect in health.

“The promise of precision medicine is that we will be able to ‘live longer better’, and we’ve seen from the Apple Watch the potential benefits of constantly monitoring people’s heart rates. So many people have told us they found they had a heart issue and might have died without it.”

He added: “We’re in the very early days – the game hasn’t even really started yet – but Scotland is in a great place to get things moving. The motivation to help people here is pure, and is focused on innovation rather than concern with how doctors will be reimbursed by insurance companies as is often the case in the US.” 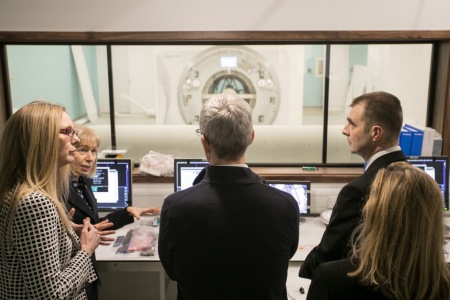 Tim also entered the realm of school education, advocating that “coding should be a required subject in schools”.

He added: “Kids today will never know a non-digital world and coding is great training for the mind. I’m not saying everyone should take up coding as a career, but everyone should know the possibility of coding.”

Other exchanges ranged from the Apple CEO's views on President Trump’s controversial executive order on immigration – “Our simple view is that Apple would not exist without immigration, so this is a huge issue for us” – to his advice “don’t work for money – it will wear out fast or never be enough”.

In a “fireside chat” discussion with David Phelan, technology correspondent of The Independent, Tim also talked about his visits in France and Germany to start-up companies and the Berlin Philharmonic Orchestra which uses Apple technology.

“Apple’s background and history is in working with creative people,” he said.

Tim was proposed for his honorary degree by Professor Stephen Brewster, Professor of Human-Computer Interactions, who said Dr Cook shared the University’s commitment to promoting diversity.

In his oration he said: “Tim became CEO in 2011 and has led Apple to new heights, introducing some of the company's most forward-thinking and successful new products. At the same time, he has given Apple a greater voice in matters of equality and human rights, environmental protection, and privacy. Two years ago he urged students at the George Washington University to find work that is ‘infused with moral purpose’. ‘You don't have to choose between doing good and doing well’.”

Principal and Vice-Chancellor Professor Anton Muscatelli introduced the graduation ceremony, saying the fact that all tickets had gone within under an hour was a sign of Tim's popularity.
The University conferred honorary degrees by “drawing great men and women into our community of alumni to reaffirm our belief in the human capacity to do great things”, said Professor Muscatelli.