The University of Glasgow is awarding 15 honorary doctorates this year in recognition of achievements and contributions across a range of backgrounds, including peace campaigning, services to science and industry and comic art.‌ 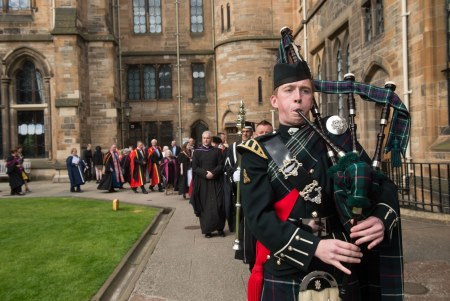 The first awards will be presented at an official ceremony on Commemoration Day, June 14, to mark the foundation of the University in 1451.

Among the recipients will be:

Vin Deighan, alias Frank Quitely, the world-renowned DC comic artist, the most in-demand graphic artist in the industry today. Frank Quitely, based in Glasgow, is a leading comic artist whose original artwork for Batman, New X Men and Superman is presently the subject of a major art exhibition at Kelvingrove Museum and Gallery, Glasgow.

Sir Paul Nurse, a geneticist and cell biologist, shared the 2001 Nobel Prize in Physiology or Medicine and received the Albert Lasker Award and the Royal Society's Royal and Copley Medals. He was knighted in 1999 and received the Legion d'honneur in 2003. Sir Paul is current Director of the Francis Crick Institute in London, and has served as Chief Executive of Cancer Research UK and President of Rockefeller University.

Rose Gentle, mother of 19-year-old Fusilier Gordon Gentle, a young soldier killed in Iraq in 2004. Rose Gentle is a founder member of Military Families Against the War and the Justice 4 Gordon Gentle campaign. She will receive her honorary degree at a service held at the University of Glasgow on November 30.

John Shaw, Vice Chairman of India’s largest biopharmaceutical company Biocon Limited, and an alumnus of the University of Glasgow. During Mr Shaw’s visit to the University, he and his wife, Biocon’s managing director Kiran Mazumdar-Shaw, will also sign a Memorandum of Understanding to advance collaboration and partnership between the company and the University.

A further group of awards will be made during the summer and winter graduations 2017.

Professor Anton Muscatelli, Principal & Vice-Chancellor, University of Glasgow, said: “Awarding honorary degrees is an opportunity for the University to recognise the achievements of individuals from across all walks of life whose work and public spirited efforts have made a positive impact not just in Scotland, but the UK and around the world.