Inherited genes may cause more cancer than previously thought

A new study into a rare type of pancreatic cancer reveals that we may inherit more than twice the number of ‘cancer genes’ than experts previously thought.

The research, which was led by the ARC-Net Research Centre of the University Hospital of Verona, Italy, with significant contributions from the University of Glasgow, is published today in Nature. Scientists looked at neuroendocrine tumours (NETs), specifically those which are found in the pancreas (PaNETs), the most common form of this rare cancer.

The research in a nutshell

Researchers found that there were a significant number of inherited mutations in this type of cancer – 17% of PaNETs cases looked at were linked to inherited faulty genes. Previously it was thought only 5% of tumours were linked to hereditary genes.

NETs are relatively rare and represent less than 0.5% of all malignant tumours. They are low-incidence tumours, but with high prevalence, often because patients live for many years with the disease. However, these tumours can also be fatal – Apple co-founder Steve Jobs died of a pancreatic neuroendocrine tumour after having the disease for several years. 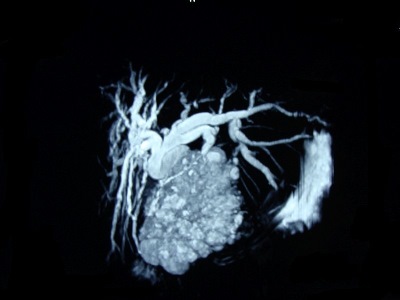 The study was coordinated by the Veronese multicentre team of Arc-Net, led by Professor Aldo Scarpa, which brought together pancreatic cancer expertise from around the world.

Professor Scarpa said: “In this study we studied 160 PaNETs. By sequencing the genome of these tumours we have decrypted the landscape of genetic alterations of these tumours. This discovery will allow us to target the development of specific therapies that aim to counter the alterations identified.”

Professor Andrew Biankin, the University of Glasgow’s Regius Chair of Surgery and the Director the Translational Research Centre, said: “This study is a great example of International Team Science under the auspices of the International Cancer Genome Consortium. We managed to overcome all the societal hurdles of data and material sharing to make significant findings in an uncommon cancer type that can be difficult to treat. Glasgow is proud to make a substantial contribution to this project led by Aldo Scarpa in Verona, Italy.”

“One of the most provocative findings is that these cancers had a larger than expected inherited gene defect that likely contributed to their development, potentially raising challenges in the clinic and refocusing future studies in the area.”

The most common NETs are those that arise in the gastro-entro-pancreatic tract (70%), followed by those affecting the lungs (20%) and other body parts such as skin, thyroid, parathyroid and adrenal glands (10%).

Dr David Chang, one of the first authors on the paper, said: “This is the largest and most comprehensive study to date on pancreatic neuroendocrine tumour – a relatively rare pancreatic tumour type – using next generation-sequencing technology.

“We now have a deeper understanding of the molecular pathology of PanNET, including defining specific ways which these tumours can mutate. Importantly, we identified key biomarkers in tumours that could lead to better treatment options.”

Leanne Reynolds, Head of Research at Pancreatic Cancer UK, said: “This promising research could lead to every patient with a pNET tumour receiving the right treatment at the right time, which could give them the chance to live for longer. While there are existing treatments for pNETs, we can’t currently predict which treatment would be most effective for each patient, but these new insights could change that in the future.

“We must now invest in further research to develop tests to show us the sub-type of pNET tumour each patient has, which could then allow them to be fast tracked to the best treatment for them. Because 80 per cent of pancreatic cancer patients are diagnosed at an advanced stage, matching patients with the most effective treatment as quickly as possible is absolutely vital. That’s why we will be funding research into this area as part of our new five-year research strategy, which we launched today.”

AOUI Verona is a national and international reference for pancreatic diseases. Verona, thanks to the applied Arc-Net Research Centre, represents Italy in the International Cancer Genome Consortium (ICGC) with the support of the Ministry of 'Education, Universities and Research and relevant contributions from the Ministry of Health and AIRC, Italian Cancer Research Association.