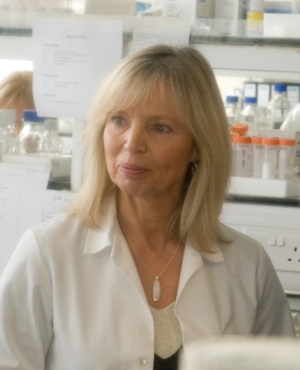 Mandy MacLean, Professor of Pulmonary Pharmacology, has been named the 2017 recipient of the Reynold Spector Award in Clinical Pharmacology given by the American Society for Pharmacology and Experimental Therapeutics (ASPET). Prof MacLean is being recognised for her excellence in research on pulmonary arterial hypertension and her dedication to postgraduate teaching.

The Spector Award was established in 1994 in recognition of Dr. Spector’s dedication and contributions to clinical pharmacology. The award honors excellence in research and/or teaching in the field. Prof MacLean was nominated for the award by Prof Rhian Touyz, Director of the Institute of Cardiovascular and Medical Sciences.

Prof MacLean said: "This award recognizes the excellence and efforts of all my research group, both past and present, without whom my achievements would not be possible. I would like to thank them for the dedication through the years and ASPET for this wonderful award.

"I also wish to acknowledge the wonderful PAH patient associations who put their trust and support into all the research that is carried out into PAH. Our main motivation is to improve their quality of life and survival. I would be delighted to think that our research has contributed in any small way to this end."

Prof MacLean’s research has focused on the pharmacology of PDE5, ET-1 and serotonin in the pulmonary circulation and how this changes during the development of pulmonary arterial hypertension (PAH). As PAH is more prevalent in females, her current work concentrates on sex effects and oestrogen metabolism in PAH. This work has contributed to PDE5 inhibitors and ET-1 antagonists being used to treat PAH. More recently, her work has encouraged clinical trials of aromatase inhibitors and tryptophan hydroxylase inhibitors for PAH.

Prof MacLean has always had a passion for postgraduate student training, having attracted over £4M for PhD and MRes opportunities.

Over her career, Prof MacLean has been the recipient of numerous prestigious awards. She received an MBE in the 2010 Queen’s New Year’s Honours list for her career and public engagement. In 2013, she was elected as a Fellow of the Royal Society of Edinburgh (FRSE) and now sits on Council of the RSE.

ASPET will present Prof MacLean with the Spector Award during the Business Meeting and Awards Presentation at the ASPET Annual Meeting at Experimental Biology 2017 in Chicago, IL on Saturday, April 22, 2017.