An important agreement has been signed in India that will open the way to closer working between scientists in India and their counterparts in UK universities.

The LIGO India agreement was signed officially at the British Council offices in New Delhi between a consortium of universities in India led by IUCAA (Inter-University Centre for Astronomy and Astrophysics), in Pune, and a consortium of UK universities led by the University of Glasgow. The signatories were Principal and Vice-Chancellor Professor Sir Anton Muscatelli and Professor Somak Raychaudhury, Director of the IUCAA Pune, lead university in the programme in India. 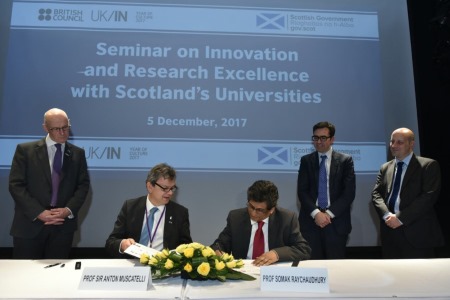 The programme is being funded by the UK’s Science and Technology Facilities Council (STFC) through its Newton-Bhabha project on LIGO. It will focus on building capacity within India for the LIGO India detector.

The LIGO India partnership will allow scientists in India to build a third LIGO detector in their country; upscale their entrepreneurial activity through creating more business spin-offs by using applied gravitational wave research; and strengthen India’s capacity in the teaching of STEM (Science, Technology, Engineering and Mathematics) through public outreach and school-focused training activities.

This collaborative programme will also enable Indian scientists to work with UK institutes for extended periods of time, with reciprocal visits to the India labs to develop infrastructure and provide onsite training, essential to build the capability to deliver a LIGO-India detector.

The UK consortium of Universities involved in this Newton-Bhabha project (including Glasgow, Birmingham, Cardiff, Sheffield, Southampton, Strathclyde and the University of the West of Scotland) have played a leading part in the international collaboration over decades which eventually led to the detection of gravitational waves.

LIGO is operated by Caltech and MIT with funding from the USA’s National Science Foundation (NSF), and supported by vital input from more than 1,000 researchers around the world – including the Universities of Glasgow, Cardiff and Birmingham amongst others in the UK.

Scientists from the University of Glasgow’s Institute for Gravitational Research, together with colleagues from Strathclyde, Birmingham and The UK’s Science and Technology Facilities Council’s Rutherford Appleton Laboratory led on the conception, development, construction and installation of the sensitive mirror suspensions in the heart of the LIGO detectors.‌‌‌ 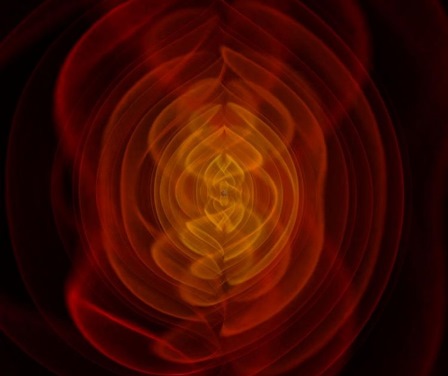 Sir Anton signed the Memorandum of Understanding while taking part in a Scottish Universities/Scottish Government visit to India to foster stronger links in trade, research and business.

He said: “The LIGO India partnership is a very important collaboration for all the universities involved: Glasgow, Birmingham, Cardiff, Edinburgh, Sheffield, Southampton, Strathclyde and the University of the West of Scotland from the UK side; and in India, the Inter-University Centre for Astronomy and Astrophysics Pune, the Indian Institute of Technology Madras, the Indian Institute of Science Education and Research (IISER) Pune, and Tata Institute of Fundamental Research Hyderabad. Together we can build capacity through a variety of means, including research collaboration and knowledge exchange. The University of Glasgow continues to be very proud of its role in the detection of the first gravitational waves. That programme had inter-university collaboration at its very heart and I know I speak for all the partners involved that we are all delighted that this Memorandum of Understanding will develop that collaboration yet further.”

Professor Somak Raychaudhury, Director of the IUCAA Pune, lead university in the programme in India, said: “With the siting of the 3rd Advanced LIGO detector in India there is an essential need for critically skilled students, postdocs and early career researchers to be trained at the highest level in Gravitational Wave astronomy, for construction of the infrastructure/technology & data pipelines. In turn, the LIGO India project will help the Indian scientific/community to be a major player in the emerging research frontier of GW astronomy. Based on the model of the LIGO Scientific Collaboration, there is a huge potential for inclusive growth across many areas of industry, academia and society.”

Professor Bala Iyer (ICTS, TIFT Bangalore), Council chair of LIGO India, said: “During the course of this Newton fund proposal we aim to work with our colleagues in the UK to build-up key infrastructure within India, to train the next generation of scientists and engineers. This includes the development of a 10m prototype interferometer to test key technologies and future upgrade scenarios to Advanced LIGO. Our vision is to build a connected international network, enabling India to host the most sensitive of the international gravitational wave detectors.”

Professor Giles Hammond, UK lead of the Newton-Bhabha project, who works at the University of Glasgow, said: “The UK has a proven track record in delivering high-quality technology/outreach activities relating to gravitational wave science, including the delivery of key hardware for the LIGO mirror suspensions. A model of sharing knowledge via staff/postdoc/student exchanges to the UK, together with trips to Indian institutes, will strengthen and benefit the UK and Indian academic communities, providing high quality training of the next generation of scientists/engineers.”

Mr Swinney said: “The University of Glasgow’s work on the detection of gravitational waves is a fantastic example of Scotland’s world-leading science base, and the UK and international partnerships they have developed through the LIGO scientific collaborations are not only changing the frontiers of astronomy, they are opening up new technological opportunities for industry and society.

“I am delighted that through this Memorandum of Understanding, the LIGO India partnership will allow key infrastructure to be built in India to support work on gravitational waves within the research community in India. It is also encouraging that the programme will seek to build capacity through support and training of students and early career researchers as well as facilitate staff exchanges between our countries.

“Improving skills, enthusiasm and knowledge of STEM subjects at all levels of school, college and university are vital to both Scotland and India’s society and future economic prosperity. I am pleased to see this is a key objective of this gravitational waves programme and it resonates strongly with the ambitions set out in Scotland’s recently published STEM strategy for education and training.”