Scientists have been able to use genetics to predict future outbreaks of vampire bat rabies virus (VBRV) on the Pacific coast of South America within four years – a scenario potentially affecting wildlife conservation, agriculture and human health. 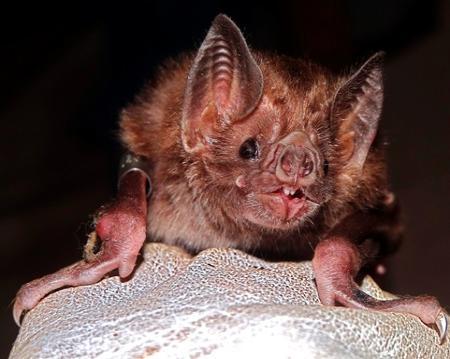 In Latin America, VBRV affects livestock production, killing great numbers of animals throughout the region, and causes lethal human rabies outbreaks, particularly in the Amazon rainforest. Currently, population movement patterns of infected bats remain unknown and difficult to measure – both factors which impede efforts to understand how the virus will spread and to prevent infections in humans and domestic animals.

The team, led by researchers from the University of Glasgow, has used nuclear, mitochondrial and viral genetic markers that linked population level patterns of bat dispersal to pathogen spatial spread. The study, is published today in PNAS, reveals that rabies has recently spread between geographically isolated bat populations.

One region was of particular concern. DNA analysis of the bats indicated gene flow across the Andes Mountains, connecting the VBRV-endemic Amazon rainforest to the VBRV-free Pacific coast. This genetic evidence of bat movement was strongly male biased, implying that the greater dispersal of male bats compared to females created a corridor for rabies to invade across the Andes.

By modelling the spread of rabies across the landscape, the scientists projected future VBRV invasion routes through northern Peru, predicting the first VBRV outbreaks on the South American Pacific coast by June 2020.

Furthermore, by collecting additional reports of VBRV outbreaks that occurred in livestock after the genetic data were collected, the team showed that rabies was indeed traveling toward the Pacific coast along the routes predicted by the genetic analysis.

By using genetic data to elucidate patterns in this way, strategies to prepare for future viral invasions – such as preventative vaccination of livestock, education of the at-risk human population or control measures within the bat population – could be developed.

Lead author Dr Daniel Streicker, Institute of Biodiversity, Animal Health and Comparative Medicine and the MRC-University of Glasgow Centre for Virus Research, said: “These results are important because they identify sex-biased dispersal as an underappreciated mechanism underlying the invasion of pathogens across landscapes.

“Sex biases in dispersal are ubiquitous in animals, so similar mechanisms could be an important factor shaping the spread of other pathogens through wildlife populations such as White Nose Syndrome or Ebola virus in bats.

Dr Streicker added: “These results show how host and pathogen genetic tools can help to understand and anticipate the spread of disease, but it is unclear why viral invasions are happening now. Is rabies a relatively new disease in vampire bats that is slowly spreading to the fringes of the bat population? Are environmental changes triggering mixing of historically isolated bat populations, or some combination of the two?”

In order to apply these findings to improve rabies control in Latin America, the team is now studying when and how far male bats disperse and whether existing or new technologies could be used to target this key group for rabies spread.

The paper, ‘Host-pathogen evolutionary signatures reveal dynamics and future invasions of vampire bat rabies’ is published in PNAS. The work was funded by the US National Science Foundation, Wellcome and Royal Society.