The University of Glasgow's LISA Pathfinder team has won the 2016 Sir Arthur Clarke Award for "Space Achievement in Academic Research or Study" at an awards ceremony held at the Royal Society in London. 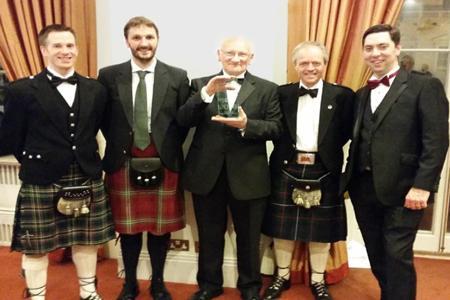 The award acknowledged their work in developing the Optical Bench Interferometer (OBI) for the ESA (European Space Agency) LISA Pathfinder mission which was launched in December 2015 and has since exceeded all expectations. The Glasgow team saw off competition from The UK GAIA Science Team and Dr Alex Brinkmeyer of Oxford Space Systems.

The Glasgow OBI is at the heart of the LISA Pathfinder spacecraft. It monitors, with picometre precision, the distance between two free-flying test masses to test the concept and practicality of flying a gravitational wave observatory in space. Driven by the extreme accuracy required, the design, development and qualification of the OBI has been a long and very challenging programme, with work on the Flight Model commencing back in 2005. Advanced bonding techniques were refined by the OBI team to meet the unprecedented component placement accuracies required. Harry Ward’s expertise and inspirational leadership and the dedication and inventiveness of the five-person team were fundamental to the success of this programme.

This year has now seen two oustanding developments in gravitational wave astronomy, in both of which Glasgow has played leading roles: the dramatic first detection of gravitational waves by the ground-based aLIGO instruments in the US, and the excellent performance of the LISA Pathfinder technology demonstrator mission in space.

With the Pathfinder success, and spurred by the ground-based detection, there is now rapid progress underway in preparation for the flight in the early 2030s of ESA’s flagship gravitational wave observatory, LISA. That observatory will complement the capabilities of the ground-based detectors and allow a greatly expanded view of the rich diversity of gravitational wave signals expected from the Universe.