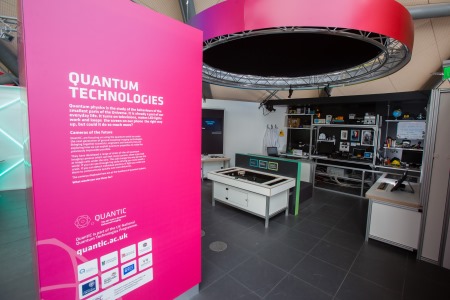 Funding worth £640,000 for two partnerships with M Squared Lasers Ltd and one with Compound Semiconductor Technologies Global Ltd were announced today (Thursday November 3) during the international Quantum Technologies Showcase at the Queen Elizabeth II Conference Centre in London.

The Fund is a joint investment by the UK’s innovation agency, Innovate UK and the Engineering and Physical Sciences Research Council (EPSRC). Projects supported by successful bids to the fund will link academia and industry to research and translate quantum technologies into new products and services.

The successful bids linked to QuantIC are:

Professor Miles Padgett, QuantIC’s Principal Investigator and Technical Co- ordinator, said: “We’re delighted to have had three bids for funding supported by the UK Quantum Technologies Innovation Fund. It’s a testament to the success QuantIC has enjoyed since it was founded two years ago, and to the potential of the blossoming quantum technologies sector in the UK. 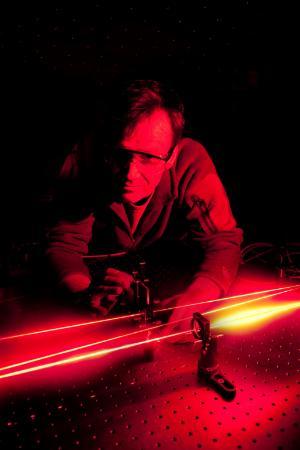 “We’re very much looking forward to working on these three exciting projects with our partners and playing a key role in developing powerful new quantum technologies.”

Visitors to the conference heard how the UK National Quantum Technologies Programme (UKNQTP) is continuing to draw the country’s research base together with industry, research funding bodies and other government agencies to build a new high tech industry in the UK.

The Showcase event also demonstrated the progress being made by the UKNQTP, including work carried out by the UK’s four Quantum Technologies Hubs, UK companies, the UK Defence Laboratory (Dstl) and the National Physical Laboratory (NPL).

There were over 30 live demonstrations on show, which harness the power of quantum effects and using this to advance technologies in measurement, security, computing, imaging and sensing, in what has become known as the second quantum revolution.

Dr Ruth McKernan, Chief Executive of Innovate UK, said: “Quantum technology has the potential to be a global game-changer. The UK is at the forefront of this and Innovate UK and its partner EPSRC, are there to give vital support to UK companies as they take the opportunities offered by this fascinating and exciting new sector.”

Exhibits demonstrated the development of 3D cameras; low-cost quantum keys for encryption; gas detectors that can image invisible gases, together with quantum magnetometers that will enable higher imaging resolutions and the ability to image deeper areas of the brain.

Professor Philip Nelson, Chief Executive of the Engineering and Physical Sciences Research Council (EPSRC), which funds the Hubs and other parts of the programme said: “This year’s showcase will give researchers an opportunity to demonstrate how their work is progressing and is an open door to potential partners to get involved. The joint investment by Innovate UK and EPSRC, announced today, will allow us to accelerate the application and exploitation of these technologies and keep the UK at the leading edge of this exciting field.”

The event was organised to mark the second anniversary of the UK National Quantum Technology Hubs which were set up in November 2014. The Hubs have been formed by a consortium of 17 universities led by the universities of Birmingham, Glasgow, Oxford and York, funded by EPSRC.

Professor David Delpy, Chair of the UKNQTP, said: “This second showcase event demonstrates the progress we have made with the number of exhibits increasing from 11 to 39 and industry partners being more clearly visible throughout both the speaker programme and exhibition.”

Part of the Government’s Blackett review series, the report examines how technologies using quantum physics are being applied and how they will develop in the future. It focuses on the specific applications of:
• quantum clocks
• quantum imaging
• quantum sensing and measurement
• quantum computing and simulation
• quantum communications
It looks at how these applications are being commercialised and where there are further opportunities for growth.