"The UK is doing well encouraging women into engineering, but we still have much more to do," those are the words of Professor Muffy Calder, from the University of Glasgow on receiving the news she is ranked in the UK Top 50 women in engineering. 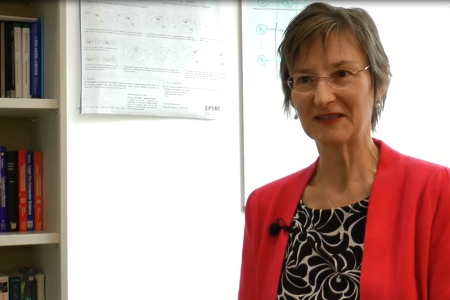 Professor Calder OBE, Vice Principal and Head of College of Science and Engineering, is only one of seven academics in the UK featured in today's Top 50 rankings, and the only academic listed from Scotland.

The Daily Telegraph list coincides with National Women in Engineering Day, which seeks to promote the widespread engineering roles women now play in the UK workplace, mainly through industry and academia.

"When I first heard I was on the list I was delighted," Professor Calder explained, "Then when I realised I was the only academic in Scotland I thought wow.

"The University of Glasgow is doing very well in this area. I think the current intake is about 20% female undergraduates taking up engineering, which is much higher than the UK average of around 15%, so we are doing very well but I am not complacent at all. But if you look at the statistics for computing and engineering, we may be taking in 20% undergraduates but typically that percentage stays the same right throughout their careers, unlike other subjects like chemistry and biology where they take in over 50% female applicants bu then you see the marked decline as they progress through their careers. So women that come into engineering find out they really like it and stay."

Professor Calder is a Fellow of the Royal Academy of Engineering, the Royal Society of Edinburgh, the British Computer Society and was awarded the OBE in 2011.

For three years she was on secondment to Scottish Government as Chief Scientific Adviser for Scotland.

Talking about the education of girls to encourage more to study computing and science, she said: "At school it's very important that we continue to encourage girls to study mathematics and physics, these are the fundamental disciplines for engineering. But computing science is also very important and we need to make sure the curriculum at school emphasises science and engineering, the rigorous aspects of computing and science, that it's not a technology we just use but that it's a very creative and rigorous discipline. So there is work to do there."

Commenting on the gap between women engineers in the UK, currently standing at around 15%, compared to nations such as India at 30%, Professor Calder said: "I think in other countries there are different issues of status particularly with engineering. It has a very high status in other countries - I would like it to have higher status here."

Professor Anton Muscatelli, Principal of the University of Glasgow, responding to Professor Calder’s place in the Daily Telegraph’s UK Top 50 women in engineering, said: “It is great news and so well deserved. Professor Muffy Calder’s profound knowledge and expertise, which over the years she has shared with staff and students throughout the University and particularly the College of Science and Engineering, has been hugely beneficial to all. Her talents have also been recognised with a range of high-profile appointments, for example her current role as a member of the Council of the EPSRC. She is a true inspiration, especially to women thinking of future careers in science and engineering.

“The University of Glasgow strives to promote diversity at all levels and I am glad to say has a proud history of women in engineering. We are confident that we will continue to improve and build on that history, especially with incredibly talented role models like Professor Calder to lead the way.”