The Institute of Infection, Immunity and Inflammation will share in a £2.1m Wellcome Trust award to fund a collaborative project for the development of a new class of antibiotics based on proteins.‌ 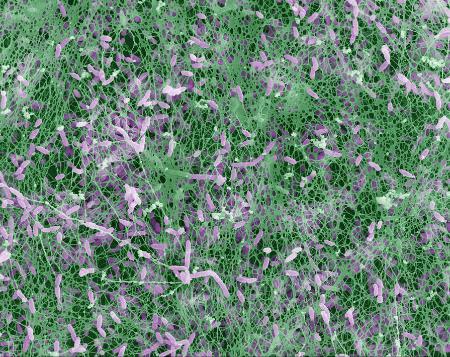 The collaboration, led by The Universities of Glasgow and Oxford, will work on the development of a new class of antibiotics, based on proteins that specifically kill Gram-negative bacteria – some of the most problematic multidrug resistant microbes.

Gram-negative bacteria, because of their additional outer membrane, are not susceptible to antibiotics that are otherwise effective against Gram-positive bacteria.

Spearheaded by Professor Colin Kleanthous from The University of Oxford and Dr Daniel Walker from the University of Glasgow, and including other colleagues in Oxford, Glasgow, London and the Sanger Institute in Cambridge, the newly funded consortium will focus on protein toxins known as bacteriocins.

Protein bacteriocins are species-specific antimicrobials that are normally produced by Gram-negative bacteria to kill competitors.

The consortium will investigate the effectiveness of such protein antibiotics on multidrug resistant Pseudomonas aeruginosa and Klebsiella pneumoniae, which pose huge problems in hospitals around the world. Both organisms cause life-threatening lung and blood infections in infants and immunocompromised patients, and have seen alarming rises in multidrug resistance.

Indeed recent estimates from the World Health Organisation suggest that more than 50% of Pseudomonas aeruginosa isolates – the leading cause of mortality in cystic fibrosis patients – are resistant to the most commonly used antibiotics and alarmingly, often resistant even to the antibiotics of last resort.

Dr Daniel Walker, from the Institute of Inflection, Immunity and Inflammation, said: “We aim to discover exactly how these potent molecules kill their target organisms and at the same time evaluate their effectiveness against different types of infections.

Professor Colin Kleanthous from The University of Oxford, said: “Our consortium brings together a unique mix of skills to investigate the potential of bacteriocins to tackle these major biomedical problems.
Traditional antibiotics such as penicillin kill a broad range of bacteria, and this lack of specificity is thought to have contributed to the rise in multidrug resistance in our generation.

Professor Kleanthous added: “The exquisite specificity of protein bacteriocins is a major advantage in this regard.”

He added: “Unless we train the next generation of scientists to tackle multidrug resistant bacteria using innovative approaches we’ll be drawn back to an era where even minor surgical procedures carry a risk of potentially fatal bacterial infections.”