Scientists from the University of Glasgow and the Moredun Research Institute have published data from a comprehensive analysis of the changes that occur in milk during mastitis caused by a bacterial infection of the udder. The team applied new analytical techniques where all the proteins (proteomics) and small chemicals (metabolomics) in milk may be examined within a single sample.

Using these innovative technologies 570 proteins and 690 metabolites in milk have been measured for the first time in the same milk samples. Among these, potential biomarkers of mastitis have been identified which could become the basis of rapid diagnostic tests to be used beside the cow to give farmers real-time information on the health status of their animals allowing for targeted therapy.‌‌‌‌‌‌ 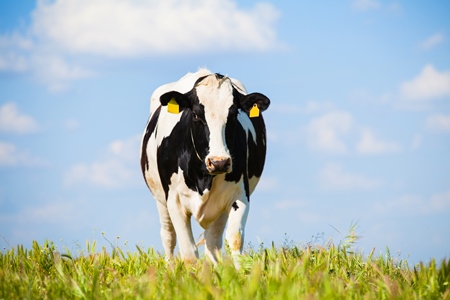 Mastitis, mostly caused by bacterial infection of the mammary gland, is the major infectious disease problem in dairy cows, being estimated to cost the global dairy industry €16–26 billion per annum based on a global dairy cow population of 271 million dairy cows. Not only does this cause health and welfare problems for infected cows but the use of drugs used to treat the animals is believed to be a significant cause of the worldwide rise in antimicrobial resistance.

Professor David Eckersall, Professor of Veterinary Biochemistry University of Glasgow said, "This integrated investigation of the response to bacterial infection in the mammary gland of dairy cows is the first time that the full range of modern analytical science has been applied to a major disease of farm animals. Our results in identification and monitoring of biomarkers of the disease have opened new possibilities in the diagnosis of this economically important disease, while changes observed in the chemical components of milk has stimulated ideas on the potential role of natural agents on disease processes.

"The combination these avenues of research may lead in the future to better diagnosis and treatment of mastitis and could reduce amount of antibacterial agents currently being used in treatments.”

By following the time course of the infection and recovery process, differing patterns of response to the infection have been discovered. Notably the bacteria reach a maximum within a day and a half of infection while the host’s defence systems take up to 3 and a half days to fully respond. Most of the host responses fall as the bacterial numbers in the udder decrease over the 2 weeks following infection although the numbers of cells from the cow’s own defence system remain elevated.

Key findings from the analysis of milk during mastitis showed a large increase in proteins such as cathelicidin and haptoglobin that are known to have natural anti-microbial activity and interestingly bile acids which are normally found in the intestine being involved in digestion.

Professor Ruth Zadoks, Moredun Research Institute said, “Mastitis is the most common and costly disease of dairy cattle in many parts of the world. It is also the main reason for use of antimicrobials in dairy cows. Better tools for early and specific detection of mastitis are urgently needed to support on-farm decision making on mastitis management and treatment.

Collaboration with the University of Glasgow has added tremendous value to mastitis challenge studies conducted at the Moredun Research Institute. Together, we have achieved more than either partner could ever have achieved in isolation. This demonstrates the value of interdisciplinary and inter-institutional collaboration and the close working relationship that exists between our two organisations. Results from this work will help to enhance animal welfare, food security, and the judicious use of antimicrobials."