MVLS awarded more than £1m of funding from MRC

Leading academics from the University of Glasgow's College of Medical, Veterinary and Life Sciences have been awarded more than £1m of funding from the Medical Research Council UK. 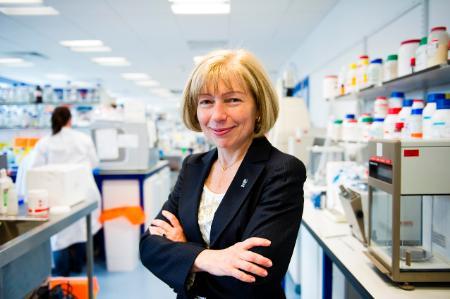 The University of Glasgow was awarded the grants as part of the MRC’s recent accelerated innovative medical research boost of £23.3 million funding, announced today (Tuesday 15 February) to take ground-breaking ideas from UK universities into industry and out to patients.

Vice-Principal and Head of the College of MVLS, Professor Anna Dominiczak was awarded £500,000 as part of the Confidence in Concept Scheme (CiC), which will be used to focus on the emergence of ‘Chemical Biology’ as part of The Glasgow Chemical Biology Programme.

Director of the Institute of Molecular, Cell and Systems Biology, Professor Neil Bulleid, was awarded around £580,000 as part of the MRC Discovery Awards scheme, to develop work in the area of redox biology, focusing on understanding the regulation of protein function and cellular physiology at every level.

These grants were part of the larger funding announcement made today by Science Minister Jo Johnson. A number of awards were announced across three different funding initiatives, set up by the MRC to specifically target different innovation needs.

The Discovery award mechanism will accelerate ‘blue skies’ medical research by providing support much faster than usual funding routes and will focus on building capacity and capability in areas of high national priority. The Discovery awards announced today will total £8.4m across 12 institutions.

Another £11.6million of funding was announced for the CiC awards across 21 universities. These awards provide flexible funding to universities to accelerate the transition from discovery science to viability testing and take promising basic research to the industry-academia interaction stage for the development of therapies, diagnostics and medical devices.

In just three years since its launch, researchers whose preliminary work has been supported by the CiC scheme awards have secured £110million of further support from charity, public sector and industry funders. The data generated has helped support the creation of 16 new spin-out companies and led to the award of at least 27 patents.

Professor Dominiczak said: “I am delighted that our college has once again been granted two substantial awards from the MRC. The work that takes place in MVLS is world-leading.
“By pooling biomedical and life sciences expertise in molecular biology, disease pathophysiology and chemistry, we have generated internationally-leading research in these fields and developed cross-disciplinary teams able to deliver our vision.”

Through a previous CiC award in 2014 MVLS leveraged substantive funding of £3.5m to advance key programmes. The College developed collaborations with industry partners, promoting confidence in our ability to attract support for onward development.

Professor Bulleid said: “Our long term strategic aim is to establish a Centre of Excellence in Redox Biology. We will use this discovery award to develop a strong foundation for this venture.”

Professor Sir John Savill, chief executive of the MRC, said: “The MRC funding awards announced today help to identify and encourage exciting science and bring different cultures together to form strong collaborations. The early outcomes show that through devolved decision-making, researchers all over the UK have exploited the flexibility and collaborative potential of these innovative schemes for health benefits.

“Confidence in Concept and the Discovery Awards allow research institutions to rapidly test out exciting new ideas in translational and basic research. Experts at the institutions themselves decide which research projects to pursue, which creates the agility to support truly cutting-edge ideas and help them to attract further funding. Proximity to Discovery is a smaller-scale scheme that helps academics form important connections with industry, enabling them to exchange skills and develop productive partnerships.”