The ranking, announced today by the data science company Altmetric, is an annually released list of academic papers which have received the most attention in the previous year from sources which Altmetric track. 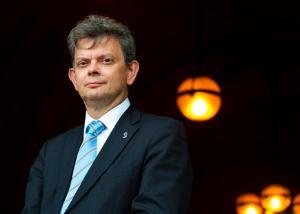 This includes mainstream media coverage, citations on Wikipedia and in public policy documents, discussions on research blogs, and mentions on social networks. In the past year, Altmetric has tracked over 17 million mentions of 2.7 million different research outputs.

The third-ranked paper in Almetric’s top 100, ‘Observation of Gravitational Waves from a Binary Black Hole Merger’ in the journal Physical Review Letters, outlines the historic first detection of gravitational waves at the Advanced LIGO detector in the USA.

Researchers from the University of Glasgow’s Institute for Gravitational Research, led by Professor Sheila Rowan, played a key role in the design and construction of the sensitive mirror suspensions at the heart of the LIGO detector.

Professor Hugh J Willison and Dr Susan Halstead of the University’s Institute of Infection, Immunity and Inflammation contributed their expertise to the paper.

“The fact that gravitational waves and the Zika virus and Guillain-Barré have been so important this year, yet are so different from each other, is a testament to the depth and quality of the University of Glasgow’s research base.

“I’d like to congratulate everyone involved for their work, and I’m already looking forward to next year’s Altmetric rankings.”