Western Infirmary site is transferred to the University

The University has taken possession of the former Western Infirmary site: a significant milestone for the University which will enable the proposed £1 billion investment in the Gilmorehill campus.

The masterplan for the former Western Infirmary site, which covers 14 acres, includes:

The campus project, one of the biggest education developments in Scotland, will see an estimated investment of £1 billion over 10 years – higher than the public investment in the 2014 Commonwealth Games. It is anticipated that 2,500 jobs will be created during the construction period.

There has been extensive consultation regarding proposals for the site and the views of the University and the West end communities have been taken into consideration in the development of the masterplan.

Professor Anton Muscatelli, Principal and Vice-Chancellor of the University of Glasgow, said: “Since the University moved to Gilmorehill in 1870, we have developed a number of iconic buildings, including, of course, the Gilbert Scott Building. The facilities we built during the late 19th and early 20th centuries provided a fantastic environment for University of Glasgow researchers, who won seven Nobel prizes and many other accolades. We hope to use the new site as a catalyst to attract and grow the very best academics, to attract the very best students and to ensure that Glasgow continues to be one of the top universities in the world.”

He added: “The first major development will be a Learning and Teaching Hub – situated not on the former Western Infirmary site but on University Avenue. It will provide spaces for 3,000 students at any one time, as well as state-of-the-art facilities, and will allow us to use the latest techniques in pedagogy.” 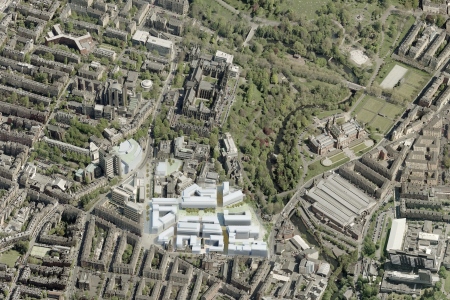 Robert Calderwood, Chief Executive, NHS Greater Glasgow and Clyde, added: “The Western Infirmary played a hugely important role in advancing medicine not just in Scotland, but globally. Many former staff were pioneers in their field: names such as Sir George Beatson’s are still very well known to this day.

“The opening of the Queen Elizabeth University Hospital last year has modernised our hospitals estate. As we look to advance medical knowledge through cutting-edge facilities at the QEUH, it’s fitting that the Western land is now being returned to the university almost 140 years later.”

Councillor Frank McAveety, Leader of Glasgow City Council, said: “I know that the University of Glasgow has been engaging strongly with local community groups and businesses in this part of the city and I hope to see a mutually beneficial relationship grow between ‘town and gown’ as this project develops.

“The University is an important contributor to the economic, social and cultural future of Glasgow. These are ambitious plans to make this area of the West End even more vibrant and I look forward to this site being transformed into one which enhances Glasgow’s international reputation.”

The University’s Gilbert Scott building was completed partially in 1870 but the hospital did not open until 1874. The original proposal was to situate the hospital on the current site of the Kelvingrove Museum and Art Gallery – then known as Clayslaps – which was owned by the University. Instead, however, the town council swapped land it owned on the Western Infirmary site – Donaldshill – for the Clayslaps land. In 1878, a pre-emption clause was signed stating that if the hospital ever ceased to be a hospital then the University could buy back the site. That day has now come.