The new archaeology strategy for Scotland has been launched in Glasgow at the first annual meeting of the European Association of Archaeologists to be held in Scotland.

Fiona Hyslop, Cabinet Secretary for Culture, Europe and External Affairs, told 2,000 delegates from more than 80 countries - the largest ever gathering of archaeologists ever to meet in Scotland – that the strategy was an important step towards realising the full potential of Scotland’s outstanding archaeology.

Scotland’s Archaeology Strategy has been developed by the Scottish Strategic Archaeology Committee, which was chaired by the University of Glasgow’s Professor of Historical Archaeology, Stephen Driscoll, and coordinated by Historic Scotland, with input from over 200 people from across the archaeology sector in Scotland and beyond. It sets out a shared national vision that Scotland’s archaeology should benefit everyone in society. 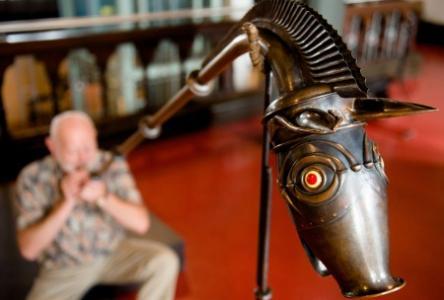 Ms Hyslop told the opening ceremony for the EAA annual meeting, hosted by the University of Glasgow: “Archaeology is a vital part of our heritage. We want archaeology to be for everyone, with the study of the past offering opportunities for all to discover, to care for, to promote and to enjoy our rich and diverse heritage. If we can get this right, archaeology will contribute to physical and mental well-being as well as to the growth of knowledge and the economy, and help us to tell Scotland’s stories in their global context.”

Professor Driscoll, who also chaired the EAA organising committee, said the launch of the strategy was a significant moment for archaeology in Scotland.

“Although cultural heritage is central to Scotland’s national identity, this is the first time that the whole sector has joined together to articulate a shared vision and agreed aims. For the first time in many years, Archaeology is headline news, which must be a good thing,” said Professor Driscoll.

“The most significant reorganisation of Scottish archaeology in over 100 years is coinciding with our Annual Meeting. And in October, the Royal Commission on the Ancient and Historical Monuments of Scotland (a survey and recording institute which is over 100 years old) will be united with the Scottish Government agency Historic Scotland to form a new organisation, Historic Environment Scotland, a charitable body which will combine the statutory and investigative functions.”

The aspiration was to “make archaeology more central to the public’s awareness of Scottish culture” and to “make it matter as an activity and as a resource”, said Professor Driscoll.

“Preparation of the strategy has involved academics and professionals, but it is intended explicitly to make archaeology matter to a wider audience than it has in the past - so now we want to make sure that everyone else is involved too. We envision this strategy as an open conversation about archaeology’s contribution to society in Scotland, and the importance of situating our heritage in a global context. Hopefully today’s announcement at this major conference will start a national conversation about archaeology.”

The Cradle of Scotland exhibition, which opens this week (September 3) at the Hunterian Museum, was a good example of collaboration between higher education, the Scottish Government through its executive agency, Historic Scotland, and the public through numerous volunteering activities, said Professor Driscoll.

“This exhibition at the Hunterian Museum highlights a 10-year research project in Strathearn by the University of Glasgow and others supported by Historic Scotland. The starting point for this project was the well-documented Pictish royal palace at Forteviot, but until this research work it was not clear why the royal centre was located here. Now we know that, not only was this the cradle of the Scottish kingdom, but the cradle of the agricultural revolution in Scotland and one of the great ritual centres of prehistoric Europe,” he said.

To complement the EAA's Scientific Programme, the Glasgow EAA Committee has organised a series of artistic events at various locations around the city under the banner of the Our Place in Time arts festival.

The artistic programme is intended to communicate to the wider public the excitement that archaeologists get from the intimate exploration of the remains of the past. Some of the work has been newly commissioned for this event, such as John Creed’s Pilgrims’ Crozier; other works have been explicitly inspired by reflections about the distant past, such as the photographic exploration of early Celtic saints by Thomas Joshua Cooper. His exhibit, entitled Wandering Home, runs from August 29 – September 30 at Glasgow Cathedral and Govan Old Church.

The ability to inspire the wider public is celebrated by the Dig Art competition, the best of which will be displayed on the railings of the University of Glasgow during the first week of September. Two short films have been made by Kate Robinson and Circa Media: “Tracing Stories” examines the connection between archaeology and Scottish writers, while “Fashioned Earth” explores the connection between contemporary art and archaeological sites. An overview of the Our Place in Time programme is presented in a publication Trace.

EAA Glasgow 2015 is sponsored by Glenmorangie.