The first study into the effectiveness of a walking programme to help adults with intellectual disabilities become more physically active has found that existing approaches have no real impact.

More intensive or home-based programmes are likely to be required to reduce the time this group of adults spend sitting down, the researchers suggest. 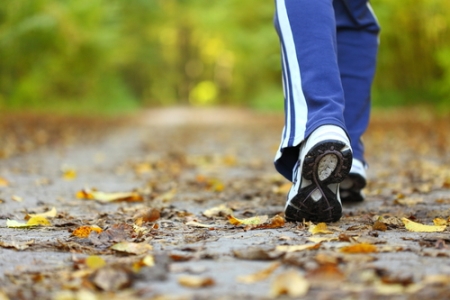 Dr Craig Melville, Senior Lecturer in Learning Disabilities Psychiatry in the University of Glasgow’s Institute of Health and Wellbeing, said the findings had “important implications on understanding intervention-generated inequalities in socially disadvantaged groups”.

The first ever study of its kind, published in the International Journal of Behavioral Nutrition and Physical Activity, the report describes how a team of researchers adapted a Walk Well intervention for adults with intellectual disabilities in a bid to increase their levels of physical activity and to reduce the time they spent sitting. The study was funded by the Chief Scientist Office (CSO) of the Scottish Government.

The researchers randomised 102 participants in 50 clusters; 54 took part in the Walk Well programme and 48 were allocated to a waiting list control group. A majority of participants lived in the most deprived neighbourhoods of Scotland; both groups took fewer than 5,000 steps per day and 59% had a BMI in the obesity range.

The researchers found:
• There was no significant post-intervention effect of Walk Well on mean steps per day at 12 weeks;
• There were no significant differences in any of the sedentary outcomes attributable to participation in the Walk Well programme.

Dr Melville said: “The additional barriers to physical activity experienced by adults with intellectual disabilities mean that decision-making and actions are most often expressed in the context of existing personal relationships and the majority of participants in Walk Well were supported by family or paid carers during walking.

“However, many participants and carers reported difficulties finding time to walk together. Cuts in social care budgets have disproportionately impacted on disabled people and even when social care support is available, it is often not funded at a level that allows paid carers to support adults with intellectual disabilities to be physically active. Therefore, the lack of effect in the Walk Well trial may be due to a lack of availability of social support to make walking accessible, facilitate community participation and moderate social disadvantages.”

He suggested that social enterprises, volunteer organisations and buddy programmes might have a role to play in supporting adults with intellectual disabilities to be more active.

Another potential approach might be to design programmes to reduce the time spent sitting, replacing it with standing or light intensity physical activity – actions associated with health improvement and reduced cardiometabolic risk.
Since the Walk Well programme did not change walking, BMI or sedentary habits, the researchers argued that “it should not be assumed that physical activity interventions with proven efficacy can be easily adapted for adults with multiple and complex patterns of social disadvantage”.

They concluded: “Social support from others should be conceptualised as a central component of physical activity programmes to support adults with intellectual disabilities. However, increased participation in walking and other types of physical activity is likely to require specific social support that is over and above existing support from family and paid carers.”