Phonetics experts have completed a project to reveal the hidden workings of our tongues and vocal tracts using 1,500 ultrasound videos. The unique corpus of ultrasound videos was compiled as part of a research project looking at how speakers of different accents move their tongue and lips.

Researchers on the Dynamic Dialects project, led from the University of Glasgow used Ultrasound Tongue Imaging equipment to reveal how the hidden mechanics of our lips and tongues, combine to produce the distinct accents from different speakers of English around the world.

"Nurse” produced by a female Filipino speaker from Manila

The most extensive study of its kind, the project looked at native English speakers from 48 regions and 16 different countries around the world, building up a comprehensive picture of how and why different accents of English are distinct from one another.

The publicly accessible corpus is designed to be used as a teaching tool for speech and language professionals, as well as a resource for future study by teachers, students and researchers of phonetics.

The three-year project was a collaboration between researchers at the University of Glasgow, Queen Margaret University, UCL and Edinburgh Napier University, and was funded by the Arts and Humanities Research Council and the Carnegie Trust for the Universities of Scotland.

The videos in the Dynamic Dialects accent database include sets of 27 reference words, along with and a brief sample of spontaneous conversational speech from each speaker. The ultrasound videos have been synchronised with audio and video of moving lips so that researchers are afforded a clearer view than ever before of how the precise mechanics of how speech is produced.

‌The team will also be re-launching a phonetics teaching resource, Seeing Speech, which contains 360 moving 2-D videos showing the inside of the vocal tract. The videos were obtained using ultrasound tongue imaging and magnetic resonance imaging technology. The updated version of the Seeing Speech website contains 60 2-D vocal tract animations, created by Dr Grégory Leplâtre of Edinburgh Napier University. Together with the new Dynamic Dialects resource, the two video-based corpora will provide a unique and extensive visual resource for study speech production and will be key resources for both students and teachers of linguistics and speech therapy. 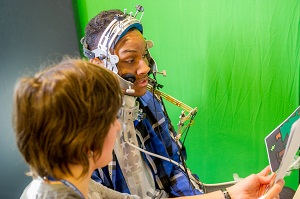 Jane Stuart-Smith, Professor of Phonetics and Sociolinguistics at the University of Glasgow and lead researcher on the Dynamic Dialects project, said:  “We are delighted to be able to launch this unique resource. As most of the movements of the tongue and vocal tract are hidden from view when we speak, the videos in the Dynamic Dialects corpus will give us a clearer view than ever before what is actually happening inside our vocal tract when we speak, and how this might differ between people from different places.

“Being able to look in this much detail at the mechanics behind accents will hopefully present linguistics researchers with far more opportunity to look at our accents, how we form them and also identify how and why they may be changing over time.

“Beyond this we also hope it will present new opportunities to a range of groups, from members of the public interested in accents, to speech and language teachers and therapists.”

Dr Eleanor Lawson, from the School of Health Sciences at Queen Margaret University, Edinbugh, said: "We envisage that the 2-D vocal-tract animations available on the Seeing Speech website will be particularly useful for those studying speech, those who are learning how to produce new speech sounds while learning new languages, or for speech therapy."

The new Web resources will be launched at a public event in the Glasgow Science Centre on Saturday 30th May where members of the public will be invited to get their tongues imaged using ultrasound technology.