Raise a pint to science with the University of Glasgow

A group of young scientists from the University of Glasgow are offering local people the chance to enjoy an educational drink at the Pint of Science festival. 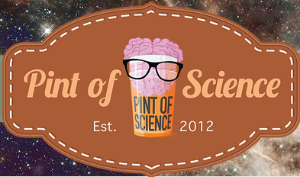 The Pint of Science project is run by a group of volunteer PhD students and postdoctoral researchers who are fired up by the idea of communicating cutting-edge science to the general public in an informal setting – namely, the pub.‌

Over three nights between  Monday 18 May and Wednesday 20 May, some of the University of Glasgow’s best science communicators will host scientific discussions in four pubs around the city. They will talk for between 15 minutes and half an hour , with the remainder of the evening devoted to questions and answers, and general discussion, with some evenings featuring science quizzes and comedy.

Event co-ordinator Scott Smith, a PhD student at the University of Glasgow’s School of Physics and Astronomy, said: “From the science behind Star Wars to the life-saving selfie, from the history of the brain to a lady who is bringing along parasites we have something for everyone. Just science, a pint and some good old fashioned scientific discussion!”

Pint of Science began in 2012 with events in Oxford and Cambridge. This year events will be held in a further 50 cities across eight countries around the world. For the second year in a row, the University of Glasgow is the only participating Scottish university. Most evenings last year sold out, with a total audience of 500 attending the talks.

Each of the four participating pubs will have a specific theme, with events each night between 18 and 20 May:

Tickets to each event are £3. For more information visit http://pintofscience.co.uk/events/glasgow/