X-rays light up the surface of our Sun in a bouquet of colours in this new image containing data from NASA's Nuclear Spectroscopic Telescope Array, or NuSTAR.

The high-energy X-rays seen by NuSTAR are shown in blue, while green represents lower-energy X-rays from the X-ray telescope instrument on the Hinode spacecraft, named after the Japanese word for sunrise.

The yellow and green colours show ultraviolet light from NASA's Solar Dynamics Observatory. Dr. Iain Hannah, of the University of Glasgow, will present the image at the National Astronomy Meeting in Llandudno. 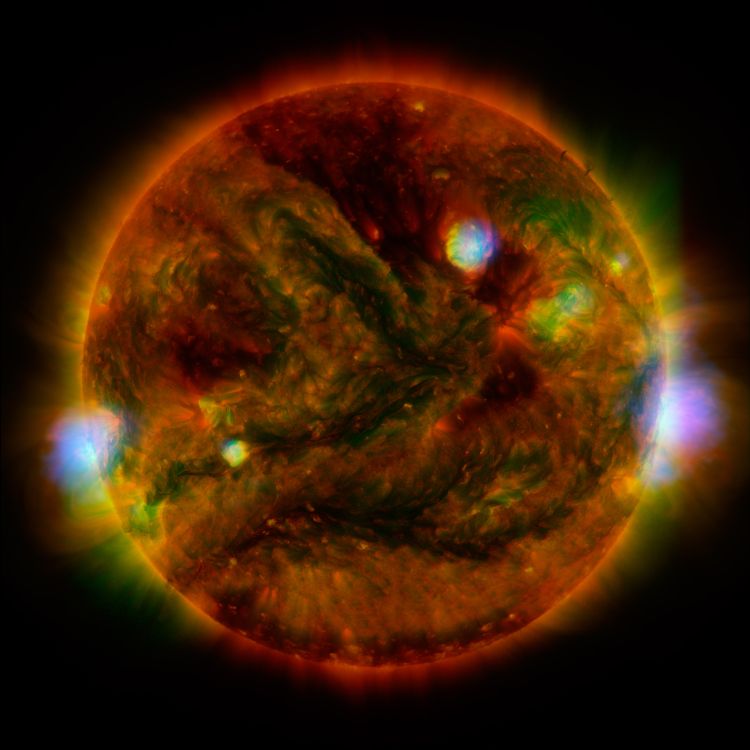 NuSTAR usually spends its time examining the mysteries of black holes, supernovae and other high-energy objects in space. But it can also look closer to home to study our Sun.

"We can see a few active regions on the Sun in this view," said Hannah. "Our Sun is quietening down in its activity cycle, but still has a couple of years before it reaches a minimum."

Those active areas of the Sun are filled with flares, which are giant eruptions on the surface of the Sun that spew out charged particles and high-energy radiation. They occur when magnetic field lines become tangled and broken, and then reconnect.

NuSTAR may also be able to directly detect hypothesised nanoflares, which would be only one-billionth the energy of flares. Nanoflares -- which may help explain why the Sun's atmosphere, or corona, is so much hotter than expected -- would be hard to spot due to their small size. However, nanoflares may emit high-energy X-rays that NuSTAR has the sensitivity to detect.

Astronomers suspect that these tiny flares, like their larger brethren, can send electrons flying at tremendous velocities. As the electrons zip around, they give off high-energy X-rays.

"We still need the Sun to quieten down more over the next few years to have the ability to detect these events," said Hannah, explaining that, while our Sun is approaching the tranquil end of its roughly 11-year activity cycle, it has been showing spurious bouts of high activity.

Astronomers are also excited to use NuSTAR's images of the Sun to pinpoint where energy from flares is released. While it is known that the energy is generally liberated in the upper solar atmosphere, the locations and detailed mechanisms are not precisely known.

Cosmologists are looking forward to using NuSTAR's solar observations, too. There is a slim chance the telescope could detect a hypothesised dark matter particle called the axion.

Dark matter is a mysterious substance in our Universe that is about five times more abundant than the regular matter that makes up everyday objects and anything that gives off light.

NuSTAR might be able to address this and other mysteries of the sun.

"What's great about NuSTAR is that the telescope is so versatile that we can hunt black holes millions of light-years away and we can also learn something fundamental about the star in our own backyard," said Brian Grefenstette of the California Institute of Technology in Pasadena, an astronomer on the NuSTAR team.