Scientists have harnessed the strange power of quantum mechanics to create a digital image using fewer than one photon per pixel.

In a paper published today (Monday 5 January) in the journal Nature Communications, researchers from the University of Glasgow describe how they created an image of a wasp wing using just 50,000 particles of light, none of which ever directly interacted with the wing itself. 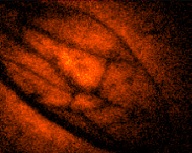 While tens of thousands of photons might seem like a lot, it is actually an extremely small amount of light. Conventional digital cameras sample around 100,000 photons per pixel to make an image with their megapixel sensors.

The process works using quantum ghost imaging, which harnesses what Einstein called the ‘spooky action at a distance’ property of quantum entanglement, where photons are paired so that any measurement of one instantaneously gives knowledge of the state of the other, no matter the space between them.

The work was carried out by the Optics Group in the University of Glasgow’s School of Physics and Astronomy in collaboration with researchers in Ottawa Canada. The project is the latest in a series of quantum imaging breakthroughs at the University of Glasgow, which was recently announced by the UK Government as the lead in a £29m Quantum Imaging Hub.

Reuben Aspden, who helped build the system, said: "Our system works by sending ultraviolet light from a laser to a non-linear crystal similar to a piece of quartz. The crystal splits every incident ultraviolet photon into two infrared photons, which exit the crystal on separate trajectories in a state of quantum entanglement.

Peter Morris, a graduate student working on the project, added: "One photon illuminates the wasp wing while the other photon goes to the camera sensor. Because the photons are entangled and share information between them on a quantum level, the image is formed on the camera’s sensor by photons which have never actually ‘seen’ the object for themselves.”

The experiment is calibrated so that information is only collected when a photon strikes a detector after passing through the wasp wing. This detector is also the source for the actual count of 50,000 photons.

50,000 photons work out to be less than one per pixel, so unavoidably the picture looks very noisy. The group then use statistical techniques – similar to those employed in JPEG compression of photos – to create an enhanced image.

Professor Miles Padgett, head of the Optics Group, , said: “Imaging in extremely low light like this can be useful in areas where more intense light can damage or fade very fragile materials. It also has applications in biological imaging and defence.

“Our Quantum Imaging Hub will work to bring research breakthroughs such as this into the commercial sphere in the coming years.”

The paper, titled ‘Imaging with a small number of photons’, is published in Nature Communications. The work was supported by funding from the Engineering and Physical Research Sciences Council (EPSRC) and the European Research Council (ERC).

For more information contact  the University of Glasgow Media Relations Office on 0141 330 7126 or email media@glasgow.ac.uk.