New research from the Universities of Glasgow and Leeds could be an important step towards creating faster, higher-capacity, lower-power data storage.

In a new paper published in the journal Nature Communications, researchers discuss their work examining an important property of a developing form of data storage known as ‘racetrack memory’. 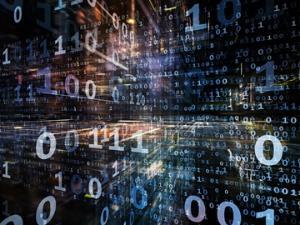 Unlike conventional hard disks, which read data from a magnetized spinning disc, racetrack memory uses lines of stationary magnetic nanowires. Electricity passed through the wires moves ‘domain walls’ – the points in the wires where the magnetisation changes direction, where information can be stored. The properties of racetrack memory make it an ideal candidate to become the fast, dense, low-power data storage format of the future.

One key question still under investigation by researchers working on racetrack memory is the types of materials which will create the most robust data storage system, capable of storing and moving information quickly and efficiently.

The team from Glasgow and Leeds used sophisticated electron microscopy to look at the structure of thin films deposited by sputtering from platinum, cobalt and aluminium oxide. This particular type of film has been suggested by other researchers as potentially useful in racetrack memory, as tests have shown that it allows data, encoded in spinning electrons, to travel up and down the walls at high speed.

Researchers have theorised that the speed of tests could be due to a physical property of the material known as ‘chirality’, which leads the electrons to travel along the domain wall at speed. However, the chiral qualities of the material have not been experimentally verified until now.

Dr Stephen McVitie, senior lecturer in the School of Physics and Astronomy, led the research from the University of Glasgow’s side.

He said: “Our MagTEM electron microscope, based here in our Kelvin building, is one of the very few in the world capable of resolving images of these domain walls with the detail required to understand their structure.

“What we’ve been able to show for the first time is that these films, made with deposition methods suited to mass production, do actually support chiral walls as demonstrated from our microscopy and magnetic measurements methods.

“We’re particularly pleased to have been involved in this work as it ties in nicely with Lord Kelvin, one of the University’s most accomplished researchers, was the first to coin the word ‘chiral’ back in 1884.

“It’ll be a while yet before new types of data storage based on these principles are commercially available, but this research is an important step towards faster, larger, less power-hungry forms of storage.”

The materials the team examined were created at the University of Leeds.

Prof. Christopher Marrows from the University of Leeds added: “We have studied domain walls in our materials in many different ways that make us suspect that they are chiral, but these imaging experiments are the first time we have directly observed this: in this case, seeing is believing”.

The team’s paper, titled ‘Magnetic microscopy and topological stability of homochiral Néel domain walls in a Pt/Co/AlOx trilayer’, is published in Nature Communications.