Researchers from the University of Glasgow are celebrating the successful launch of the European Space Agency’s LISA Pathfinder spacecraft.

LISA Pathfinder lifted off earlier today (Thursday December 3) on a Vega rocket from Europe’s spaceport in Kourou, French Guiana, on its way to demonstrate technology for observing gravitational waves from space. 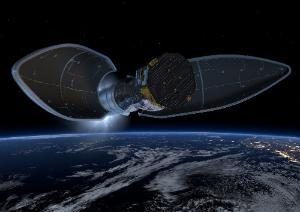 Gravitational waves are ripples in the fabric of spacetime, predicted exactly a century ago by Albert Einstein’s General Theory of Relativity, published on 2 December 1915.

LISA Pathfinder will test the extraordinary technology needed to observe the waves. At its core is a pair of identical 46 mm gold–platinum cubes separated by 38 cm, which will be isolated from all external and internal forces acting on them except one: gravity.

The launch marks the end of a decade of work for the team from the University’s Institute for Gravitational Research, who helped develop the LISA Pathfinder’s incredibly sensitive optical bench. The bench incorporates a laser interferometer, developed, built and tested by the University’s team, which is capable of detecting changes in distance between the test masses as small as 10 picometres, or one hundred millionth of a millimetre.

Dr David Robertson from the University of Glasgow said: “We’re all immensely proud, relieved and excited to see LISA Pathfinder begin its journey. It’s the culmination of a great deal of extraordinary effort and co-operation across Europe, and we’re very much looking forward to following its progress as it heads towards its ultimate destination at Lagrange Point L1, where it will be lined up between the Earth and the Sun as the Earth follows its annual orbit.

The LISA Pathfinder team discuss the science behind the project

“The launch of LISA Pathfinder, and the data it will collect, is also the first step on the road to the ESA’s proposed eLISA project, which will actually measure gravitational waves in space when it launches in the 2030s. It’s an immensely exciting time to be working in this field and we’re very pleased to be a part of the project.”

The Vega launcher lifted off at 04:04 GMT (05:04 CET). About seven minutes later, after separation of the first three stages, the first ignition of Vega’s upper stage propelled LISA Pathfinder into a low orbit, followed by another ignition about one hour and forty minutes into the flight.

The spacecraft separated from the upper stage at 05:50 GMT (06:50 CET). Controllers at ESA’s operations centre in Darmstadt, Germany then established control.

LISA Pathfinder is now in an elliptical orbit, its closest point to Earth at around 200 km and farthest point at 1540 km. Over the next two weeks, the spacecraft itself will raise the orbit’s highest point in six critical burns.

The final burn will propel the spacecraft towards its operational location, orbiting around a stable virtual point in space called L1, some 1.5 million kilometres from Earth towards the Sun.

LISA Pathfinder is expected to reach its operational orbit about 10 weeks after launch, on 13 February. After final checks, it will begin its six-month scientific mission on 1 March.

En route to the final orbit, the two cubes will be released from the locking mechanisms that hold them during launch and cruise. Once in orbit around L1, the final mechanisms will be unlocked and the cubes will no longer be in mechanical contact with the spacecraft.

A complex system of laser beams bouncing between the two cubes will measure how close to true free-fall they are to within a billionth of a millimetre – never previously achieved in space.

The spacecraft itself will be an active part of the experiment, continuously firing tiny thrusters to adjust its position and avoid making contact with the cubes, thus shielding them from any forces that would prevent them from moving under the effect of gravity alone.

If these extraordinarily high-precision measurements and operations can be achieved by LISA Pathfinder, the door will be open to building a future space observatory, capable of detecting the minute disturbances in spacetime produced by gravitational waves, which are expected to be a few tens of a billionth of a millimetre over distances of millions of kilometres.

LISA Pathfinder will operate as a physics laboratory in space. Over an intense period of six months, mission scientists will analyse the data received on Earth from each day’s operations to plan the experiments to be performed on the satellite during the following days.