New molecules could be the key to solving a looming problem with flash memory storage, researchers say in a new report published in the journal Nature today (Thursday 20 November).

Flash memory is a popular form of electronic data storage commonly used in devices such as smartphones, cameras and memory sticks. However, there is a physical limit to the minimum size of the current design of data cells, which currently use metal-oxide-semiconductor (MOS) components. These are difficult to manufacture at a scale below 10 nanometres, effectively setting an upper limit on the amount of storage it is physically possible to fit onto conventional silicon chips. 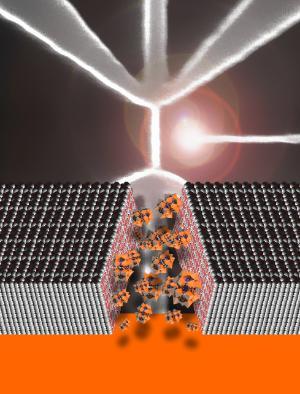 Scientists have previously suggested that using individual molecules to replace conventional data-storage components in flash memory could help create small devices capable of holding large amounts of data. However, attempts to design these molecules have faced significant practical barriers such as low thermal stability and high resistance, which has limited their use in pre-existing technologies.

A team from the University of Glasgow’s Schools of Chemistry and Engineering and Rovira i Virgili University in Spain have developed a possible solution to these problems using metal-oxide clusters known as polyoxometalates (POMs).

Professor Lee Cronin, Regius Professor of Chemistry at the University of Glasgow, led the research team. He said: “Conventional flash memory uses transistors whose design allows them to ‘remember’ whether they have been turned on or off after they’ve been removed from a power source. Those transistors’ positions correspond to binary, allowing data to be stored.

“We’ve been able to design, synthesise and characterize POM molecules that can trap charge and act as flash ram, as well as dope of the inner core of the clusters with selenium to create a new type of memory we call ‘write-once-erase’.

“The POM clusters provide a balance of structural stability and electronic activity and their electronic functionality is tunable, making them suitable as storage nodes for flash memory.

“One major benefit of the POMs we’ve created is that it’s possible to fabricate them with devices which are already widely-used in industry, so they can be adopted as new forms of flash memory without requiring production lines to be expensively overhauled.”

The research team’s paper, titled ‘Design and fabrication of memory devices based on nanoscale polyoxometalate clusters’, is published in Nature.