Cancer research in Glasgow has received a massive boost with the official opening of a new centre to help find cures for the various forms of the disease. 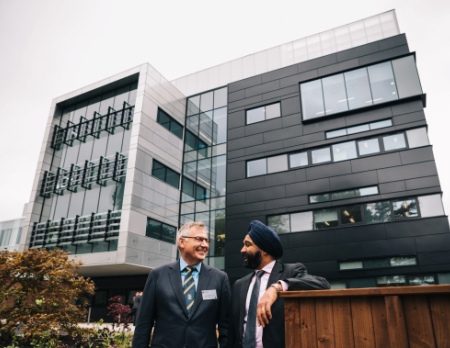 The Centre complements the Beatson Institute, which studies the mechanisms of cancer development and how it spreads, and the Beatson West of Scotland Cancer Care Centre, which provides treatment and support to patients with the disease as well as clinical research and clinical trials.

The Wolfson Wohl Cancer Research Centre will provide the missing link by shortening the time it takes to translate basic research in the lab into treatment for patients. The opening of the Centre comes 40 years after the foundation of the Oncology Department at the University of Glasgow in 1974.

Dr Kumar said: “While we have made huge strides in our fight against cancer over recent decades, the battle still rages and we need to keep investing in new research centres like this in order to make further progress.

“Glasgow is a major centre for cancer research in the UK and a key partner in our fight.

“Basic research like the kind that will take place in the Wolfson Wohl is essential to turning the knowledge gleaned in the lab into treatments that will actually help patients beat cancer. We’re delighted to see it up and running.”

Professor Andrew Biankin, Director of the Wolfson Wohl, said: “The Wolfson Wohl Cancer Research Centre is a much needed catalyst for accelerating the process of understanding cancer, improving existing therapies and identifying new ones, and bringing them to patients.

“Without the WWCRC there would be an undoubted gap in the work of the clinicians and scientists throughout Glasgow, greatly undermining the potential to optimise the use of our patient population and its high cancer incidence.

“These combined factors put Glasgow in a strong position to make a significant and long term impact on speeding up the process of drug discovery, prevention and treatment, targeting to the common cancers.”

The new centre is named The Wolfson Wohl Cancer Research Centre in recognition of donations from The Wolfson Foundation and the Maurice Wohl Charitable Foundation.

Paul Ramsbottom, Chief Executive of the Wolfson Foundation, said: “Glasgow has become an international leader in cancer research. The Wolfson Foundation is pleased, some four decades after our original investment, to continue the support of outstanding research in Glasgow through the work taking place in the Wolfson Wohl Cancer Research Centre. The opening of the Centre marks a new phase in the historic partnership between the Foundation and the University of Glasgow." 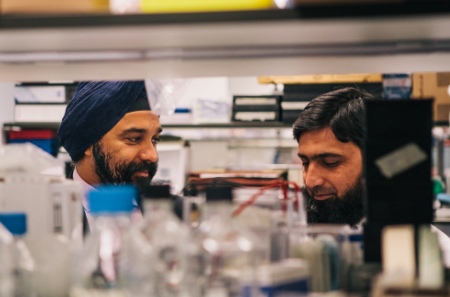 Professor David Latchman, chairman of the Maurice Wohl Charitable Foundation, said: “Throughout their lives, Maurice and Vivienne Wohl were committed to supporting medical science because they knew that investing in the right projects could make a huge difference in the world.

“The Wolfson Wohl Cancer Research Centre will continue Glasgow’s long lasting legacy of ground-breaking research and innovation in cancer research and the Maurice Wohl Charitable Foundation is proud to be a part of this outstanding facility. We have no doubt this centre’s contribution to the medical world will be invaluable in paving the way towards new and even more effective ways of treating and preventing a disease which affects so many.”

Heather McArthur, one of the patients who benefitted from the treatment and research taking place in Glasgow, said: “When I was diagnosed with breast cancer in July 2012 I just started running-quite literally for my life.

“Throughout my treatment I felt as though I was in very safe, knowledgeable and professional hands and this feeling stayed with me.

“The staff are exceptional and the treatment plan so specific to my tumour, varying slightly according to how the tumours were responding to the treatment-I had a real sense that all the care was tailored to me which made me extremely confident. I genuinely cannot fault the care and attention I received in Glasgow and feel very much that I owe my now healthy life to the dedication of the staff who treated me. The Beatson will forever have a very special place in my heart.”

The Wolfson Foundation is a charity established in 1955 that awards grants to support and promote excellence in the fields of science & medicine, health & disability, education and the arts & humanities. Over £750 million in grants (in excess of £1.2 billion in real terms) has been awarded, supporting some 10,000 projects. The founder, Sir Isaac Wolfson, was born in Glasgow. More information is available at: www.wolfson.org.uk
The Wohl Legacy
The Wohl Legacy is a group of three charitable foundations established by the late Maurice and Vivienne Wohl, which now continues their legacy of support for medical science, welfare and education in the UK, Israel, Central and Eastern Europe and the FSU. Historically the trustees have also given consideration to projects in the arts and humanities.