The Kolkata connection – collaboration flowers between the Universities of Glasgow and Calcutta.

Plagued by leeches and clad in perpetually damp tweed as he clambered over the Himalayas in search of new varieties of rhododendron, begonias and michellia – to name but a few - the Scottish-educated botanist Joseph Hooker is a largely unsung hero of the 19th century. His fame, however, may be about to spread, thanks to a collaborative programme between the Universities of Glasgow and Calcutta.

Sir Joseph Dalton Hooker (1817-1911) was one of the most intrepid explorers and collectors of his generation, travelling to India, Iceland, the Antarctic, Palestine, Morocco and the Western United States in pursuit of new botanical species.

As well as being Charles Darwin’s closest friend and confidant, he followed in his father’s footsteps in being appointed Director of the Royal Gardens at Kew. His father – and university teacher - was Sir William Jackson Hooker, Regius Professor of Botany at the University of Glasgow from 1820 until 1841, and the first official Director of Kew Gardens. His innovations included the Palm House, the Museums of Economic Botany, the Herbarium and Library, the admission of the public to the Gardens on weekdays and the publication of an official guidebook.

Now, more information may be uncovered about the links between Glasgow and Kew Gardens, thanks to a research project being undertaken by two postgraduate students from the University of Calcutta.

Ruchira Sinha, aged 25, and Shounak Bagchi, 24, who are both doing a Masters degree in museology at the University of Calcutta, are undertaking a 12-week internship, split between the University of Glasgow and Kew Gardens, as part of a programme of collaboration between Glasgow and Calcutta universities. 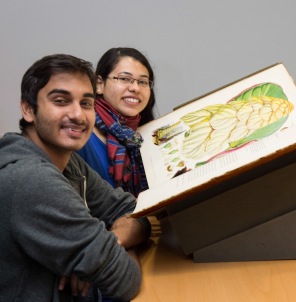 A Memorandum of Understanding, signed by the Principals of both universities in November 2011, is behind the programme, which has received funding from the University of Glasgow’s International Partnership Development Fund, which supports international collaboration activities, and a one-off £10,000 University Research Scholarship. Generous support in kind is also being provided by Kew Gardens for the London portion of the students’ research.

The format of the research project is a direct result of a visit to Glasgow in May 2012 by Supreo Chanda, then Head of the Department of Museology and Dr Indrani Bhattacharya, Assistant Professor of Museology, University of Calcutta.
The project is supervised by Dr Ian Anderson, Director of Museum Studies in the Humanities Advanced Technology and Information Institute, School of Humanities and Professor Nick Pearce, Richmond Chair of Fine Arts, History of Art and Head of the School of Culture and Creative Arts.

Both Ruchira and Shounak have BSc degrees in botany – Shounak also has an MSc in botany – making them ideal candidates for this particular research project, which will make up 250 of the 300 marks allocated to their dissertation.

J D Hooker’s history of the Flora of British India, illustrated by fellow Glasgow graduate Thomas Thomson, has been a standard textbook for the young students. In Glasgow, they have been working in the Special Collections room at the University library, poring over original works by Sir William Jackson Hooker and lithographer Walter Hood Fitch who followed Hooker from Glasgow to Kew. 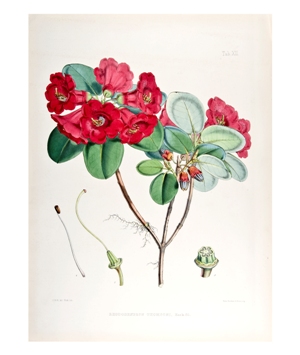 When the students turn their attention to Kew, they will be able to see at first-hand – and hopefully add to - the ongoing work on the Joseph Hooker Correspondence Project, which is conserving, digitising, transcribing, and making available, online, the personal and scientific correspondence of Joseph Dalton Hooker. He is described by Kew Gardens archivists as “the leading botanist of his day” and the man who “pioneered the discipline of geographical botany”.

Shounak describes the Glasgow-Calcutta universities’ partnership as “a fruitful collaboration”.
“We will expect to accommodate Glasgow students also,” he added.

Founded in 1807, the University of Glasgow’s Hunterian is Scotland's oldest public museum and home to one of the largest collections outside the National Museums. The Hunterian is one of the leading university museums in the UK and its collections have been recognised as a Collection of National Significance.