Professor Muffy Calder to lead the College of Science and Engineering

The University of Glasgow has announced the appointment of Muffy Calder, Professor of Computing Science and currently on secondment to the Scottish Government as its Chief Scientific Adviser for Scotland, as Vice Principal and Head of the College of Science and Engineering.

Professor Calder will take up her new post later this year when she leaves the Government, and will succeed Professor John Chapman who retires this summer. 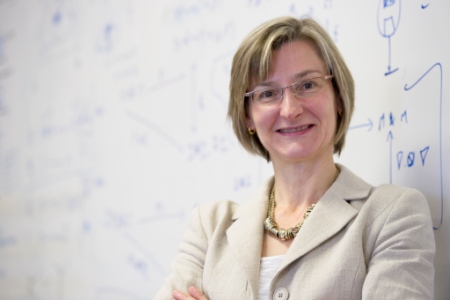 Professor David Fearn, Dean of Learning and Teaching in the College of Science and Engineering, will take on the role of Acting Head of College in the interim period.‌

As Chief Scientific Adviser for Scotland – a role to which she devotes 60% of her time, the remainder being spent at the University of Glasgow - Professor Calder is a champion of science as a key driver of the economy. Her own research is in modelling and reasoning about the behaviour of complex software and biochemical systems using computer science, mathematics and automated reasoning techniques. In 2011, Professor Calder was awarded an OBE for services to Computer Science and a Royal Society Wolfson Merit Award. She is also chair of the EU Future and Emerging Technologies Advisory Group.

The Principal and Vice-Chancellor of the University of Glasgow, Professor Anton Muscatelli, said: “Professor Muffy Calder is not only a distinguished researcher and scientist but she will also bring to her new role the additional experience and insights she has gained as Chief Scientific Adviser for Scotland. I am certain that under her tenure, the College of Science and Engineering will build on the many successes it has achieved under the leadership of Professor John Chapman.”

He added: “I am also greatly indebted to Professor David Fearn who has agreed to be Acting Head of College in the interim period between John Chapman’s retirement this summer and Muffy Calder’s departure from the Scottish Government at the end of December, when her secondment will end and she will be able to return full-time to the University.”

Professor Calder said: “I’d like to pay my respects to John Chapman who has done such an outstanding job of getting the College off to a flying start in its new formation. He will be a big act to follow.

“I hope to build on his achievements as well as the achievements of the scientists, engineers and support staff in the College itself. As Chief Scientific Adviser, I have relished the opportunity to experience another organisation and to gain the perspective of seeing what it is like from the other side of the fence. I shall be very sorry to leave the Government but can’t wait to play a role in the University in shaping the future of the College of Science and Engineering.”

Professor Chapman said: “I am very pleased that my successor is someone with the ability, energy and enthusiasm of Muffy. I am sure she will provide excellent leadership for the College.”

Looking back at his own tenure as Head of College, Professor Chapman expressed pleasure at the way the research “order book” had grown and also with the quality of students the College had been able to recruit, including an increasing number of international students.

“There has been improvement in all the major areas important to a leading university,” he said.

Professor Muffy Calder is Professor of Formal Methods in the School of Computing Science at the University of Glasgow and Chief Scientific Adviser for Scotland.

Her research is in modelling and reasoning about the behaviour of complex software and biochemical systems using computer science, mathematics and automated reasoning techniques.

In 2011 Professor Calder was awarded an OBE for services to Computer Science and a Royal Society Wolfson Merit Award. Professor Calder is chair of the EU Future and Emerging Technologies Advisory Group and also played a key role in establishing the BCS (British Computer Society) Academy of Computing as a partnership between UKCRC (UK Clinical Research Collaboration), CPHC (Council of Professors and Heads of Computing) and BCS.

Before becoming Chief Scientific Adviser, she was a Royal Society Leverhulme Research Senior Fellow and Dean for Research in the College of Science and Engineering at the University of Glasgow.