Over 200 years after his death, academics and performers have launched an interactive online resource to make choral versions of the work of Robert Burns available to the public for the very first time. 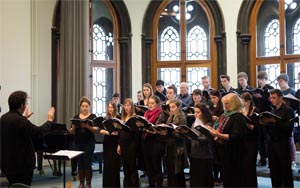 The Robert Burns Choral Settings website is the result of a collaborative project between the Centre for Robert Burns Studies and the Chapel Choir at the University of Glasgow. Over the past 12 months they have collaborated to record and compile choral versions of 20 of Burns most famous works including ‘Ae Fond Kiss’ and ‘A Man’s A Man’ from a range of composers from across Europe including Ralph Vaughan Williams and Robert Schumann.

The work of Burns was the inspiration for a number of composers from across Europe during the 19th and 20th centuries. This online resource brings the most notable of them together for the first time along with information about each work and its composer. The selection includes two world premiere performances of pieces music created by renowned Scottish composer Francis George Scott.

Dr Kirsteen McCue, Co-Director of the Centre for Robert Burns Studies at the University of Glasgow, said: “Because Burns is so central to us we think we know everything about him, but we don’t. Composers and musicians worldwide have found inspiration in Burns’ work and this project presents new information about how influential his song lyrics have been and continue to be.

“Each musical creation has taken the Bard’s work to different places entirely: linguistically, musically, and culturally, and together they reveal the universality of Burns’ poetic and musical voice.”

The Centre for Robert Burns Studies at the University of Glasgow was established in July 2007. Its mission is the development of research, scholarship and teaching in the area of Robert Burns, his cultural period and related literature: www.gla.ac.uk/schools/critical/research/researchcentresandnetworks/robertburnsstudies/