The University of Glasgow is marking 100 years since the first member of the University community of German descent fell in World War One with a unique service of remembrance.

A cross planted in the University’s Memorial Garden on the 18th December to mark 100 years since the death of former student Franz Freidrich Schlör (1888 – 1914). He is believed to be the first German student from a UK university to be honoured in this way. 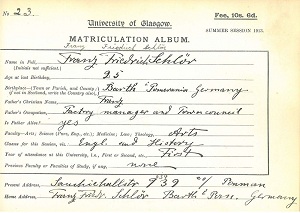 Tributes will also be paid to Colonel John Esslemont Adams, a graduate of the University, who secured the truce in 1914 and led the famous service on the battlefield.

Lieutenant Christian Knorn, a German officer in the University’s Officers' Training Corps (GSUOTC), will plant the cross for Schlör and a number of other German soldiers who fell, many of whom are still nameless. The service will also be attended by representatives of the University’s British and German communities.

Franz Schlör is the first soldier from the Central Powers to be honoured by the University of Glasgow’s Great War Project which marks the death of every member of the University community to be killed in World War regardless of which side they fought on.

The service of remembrance will be held in the University of Glasgow’s Memorial Chapel at 18:00 and will be led by University Chaplain, Reverend Stuart MacQuarrie. The planting of the cross will take place at 19:00, after the service finishes.

The Christmas Truce Service of Remembrance is part of an ongoing project, being run by the University of Glasgow’s Archive Services to update the University’s Roll of Honour with details of every member staff and student who was killed during WWI.

Lesley Richmond, Head of the University of Glasgow’s Archive Services, said: “This is a hugely significant moment for us as this shall be the first time the University commemorates the life of a student from outside the United Kingdom and the Commonwealth who died in the Great War.

“One of the aims of our project is to learn more about everyone who was part of our community here at the University, regardless of which side they fought on. We are very proud of our alumni community here and it’s humbling to be involved in this very moving project to commemorate those who were lost in World War One.”

Just before the turn of the century there was a vibrant German community in Glasgow. Between 1900 and 1914, 26 (12 female and 14 male) German-born students attended the University, with the vast majority only matriculating to study a short course as part of a wider degree. After the summer session of 1914 there were no German-born students matriculated at the University until 1920.