Thinking outside the box

Natural habitats are changing at ever-faster rates. Can wildlife cope? And what can humans learn from their responses? A range of research projects at Glasgow examining wildlife in country and city environments is helping to uncover answers.

On the wooded banks of Loch Lomond at the University’s Scottish Centre for Ecology & the Natural Environment (SCENE), scientists are studying wild birds under natural conditions. They use innovative technology, including thermal imaging and radio tracking, to detect when birds become stressed and when their biological clocks become disturbed. 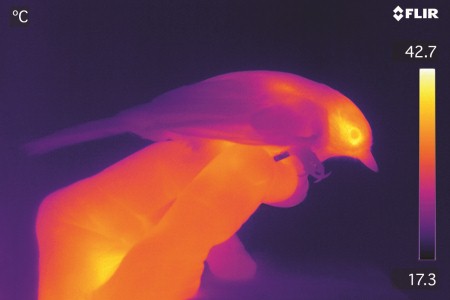 The most widely used measures of stress are hormonal and have traditionally required the collection of blood samples. However, Paul Jerem, a postgraduate student in the Institute of Biodiversity, Animal Health & Comparative Medicine, is instead using thermal imaging to detect stress by measuring the eye temperature of birds.

"Blood sampling is not only a potentially confounding stressful event in itself, but is also extremely difficult to achieve in many scenarios," he says. "The development of novel measurement techniques that are both non-invasive and have greater temporal resolution could potentially be of significant value."

The theory behind the use of thermal imaging to detect stress is that increases in core body temperature resulting from activation of the autonomic nervous system in response to stressors are accompanied by corresponding drops in surface temperature. These surface temperature fluctuations can be measured without physical contact, and at high frequencies, via infrared thermography.

The underlying purpose of Jerem’s research – under the supervision of Dr Ruedi Nager – is to investigate whether human actions are affecting the ecology of the area and to find mitigation strategies.

It’s an aim shared by predictive ecologist Dr Ross MacLeod, who is also studying the birds in the woodlands around SCENE. A specific focus is whether climate change is affecting wild blue-tits. Recent winters have been less cold but much stormier than expected, so he is investigating what effect – if any – the big storms of last winter have had on the birds.

"If the wind starts blowing hard enough, birds can’t get out and feed; they huddle somewhere and use up their fat reserves. It’s good to be fat in these circumstances," he says.

The converse, however, is that if birds have too many fat reserves, they can’t take off as fast – and that leaves them vulnerable to predators. Starvation–predation risk trade-off strategies and their links to population dynamics form part of Dr MacLeod’s research focus. To this end, he uses a model sparrowhawk to simulate risk without harm and manipulates feeding supplies in winter. As he measures how birds respond to changes in their food cycle or predator attacks, he hopes to gain greater insights into the implications for human responses to risks and environmental change.

Much of his research is focused on the 500 nesting-boxes around SCENE. These are shared by other researchers, who compare the behaviour of birds at SCENE with those in less natural habitats.

In the city of Glasgow, research assistant Dr Davide Dominoni is also focused on the inhabitants of nesting-boxes, which he studies along a connecting system of boxes reaching from SCENE into Kelvingrove Park, near the University’s main campus. His research follows studies into the biological rhythms of urban blackbirds compared to those living in a rural forest – research carried out in southern Germany in a collaborative project between the University of Glasgow and the Max Planck Institute for Ornithology in Germany.

Dr Barbara Helm, who is a specialist in biological time-keeping and supervises the latest programme in Glasgow, reports that although city life appears on the face of it to be attractive to the tits – they are coming in large numbers to the urban environment – they do not appear to be thriving.

"The birds are having to work harder to raise their offspring and they have fewer chicks in their nests,’ she says. ‘This makes us wonder what factors make city life so tough. We are thinking about broadening our studies, for example to look at immune challenges and disease ecology."

The poor life expectancy of Glaswegians living in socio-economic deprivation is well documented: SCENE researchers now want to establish whether birds also have lower life expectancy in this large city.