Edward Snowden was inaugurated as Rector of the University of Glasgow at a ceremony held in the University’s Bute Hall today (23 April 2014). 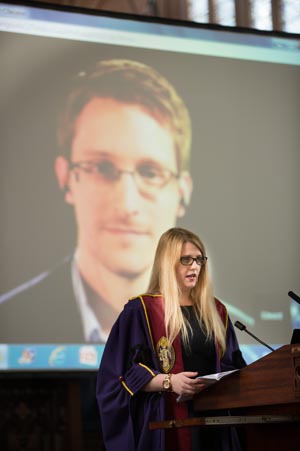 The Rector of the University of Glasgow is elected by the registered students of the University, and the main role of the Rector is to represent the University’s students. Mr Snowden takes over from the Rt Hon Charles Kennedy MP and will hold the office for the next three years.

As part of the Rectorial installation, Mr Snowden presented his inaugural address via video link to staff and students.

Mr Snowden said: “Thank you to the students, the Students’ Representative Council and everyone who took part in the elections. I am disappointed I could not be here is person.

“In a democracy people have a right to know the policies of their government...this idea that if we believe in something we should stand up for it is what I will follow in my role as Rector of the University.”

Jess McGrellis, President of the University of Glasgow’s Students’ Representative Council, said: “Today marks the installation of Edward Snowden as Rector after overwhelming support from students in the election. We are happy that Mr Snowden was able to continue the tradition of addressing students at this installation.”

Where a Rector is unable able to attend meetings of Court these are chaired by the Convenor of Court.