A team of international scientists has found organic soil frozen to the bottom of the Greenland Ice Sheet for 2.7 million years. The discovery provides strong evidence that the ice sheet has persisted for much longer than previously thought, enduring many periods of past global warming.

Glaciers have traditionally been thought to operate like sanding machines, scraping off everything from vegetation, soil and even the top layer of bedrock as they move over the land. The scientists were therefore very surprised to discover an ancient tundra landscape preserved under two miles of ice.

The findings of the team, led by Paul Bierman, Professor of Geology at the University of Vermont, have been published in the journal Science. 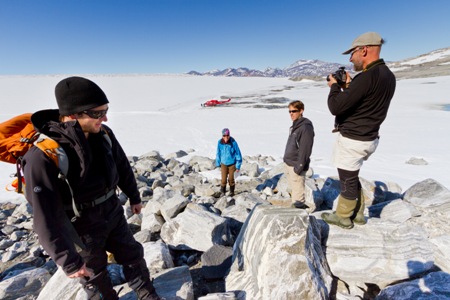 Co-author of "Preservation of a Preglacial Landscape Under the Centre of the Greenland Ice Sheet" is Dr Dylan Rood, of the University of Glasgow and the Scottish Universities Environmental Research Centre (SUERC).

“The ancient soil under the Greenland Ice Sheet helps to unravel an important mystery surrounding climate change – how did big ice sheets melt and grow in response to changes in temperature?” said Dr Rood, who also works at the Earth Research Institute at the University of California in Santa Barbara.

Greenland is a place of particular interest to scientists and policymakers since the future stability of its huge ice sheet – the size of Alaska and second only to Antarctica – will have a fundamental influence on how fast and high global sea levels rise as a result of climate change caused by human activity.

The new discovery indicates that even during the warmest period since the ice sheet formed, the centre of Greenland remained stable.

“It’s likely that it did not melt fully at any time,” said Professor Bierman.

This allowed a tundra landscape to be locked away under ice, unmodified, through millions of years of global warming and cooling.

The scientists tested 17 “dirty ice” samples from the bottom-most 40 feet of the 10,019-ft ice core extracted from the summit of the ice sheet in 1993 as part of the Greenland Ice Sheet Project 2. From this sediment, Professor Bierman and a team at the University of Vermont’s Cosmogenic Nuclide Laboratory extracted a rare form of the element beryllium – an isotope called beryllium-10. Formed by cosmic rays, it falls from the sky and sticks to rock and soil. The longer soil is exposed at the Earth’s surface, the more beryllium-10 it accumulates. Measuring how much is in soil or a rock gives geologists a kind of “exposure clock”.

The researchers expected to find next to no beryllium-10 in the sediment and were astonished to find very high concentrations of it. It means that the soil had been stable and exposed at the surface for somewhere between 200,000 and one million years before being covered by ice.

To help them interpret their findings, the researchers also measured nitrogen and carbon that could have been left by plant material in the core sample. The composition of the silty ice suggests that the pre-glacial landscape may have been a partially-forested tundra.

“Greenland really was green – however, it was millions of years ago,” said Dr Rood. “Greenland looked like the green Alaskan tundra, before it was covered by the second largest body of ice on Earth,” he added.

To confirm their findings about this ancient landscape, the researchers also measured beryllium levels in a modern permafrost tundra soil on the North Slope of Alaska. “The values were very similar which made us more confident that what we found under Greenland was tundra soil,” said Professor Bierman.

Geologists are trying to understand the history of the Greenland Ice Sheet so that they can better predict its future behaviour. It is made up of 656,000 square miles of ice – enough water, if fully melted, to raise global sea levels 23 feet.

Professor Bierman argues that global temperatures are on a path to be “far warmer than the warmest interglacials in millions of years”.

“There is a 2.7 million-year-old soil sitting under Greenland. The ice sheet on top of it has not disappeared in the time in which humans became a species. But if we keep on our current trajectory, the ice sheet will not survive. And once you clear it off, it’s really hard to put it back on,” he said.

“Preservation of a Preglacial Landscape Under the Centre of the Greenland Ice Sheet” is  published online in Science, by Paul R. Bierman, Lee B Corbett, Joseph A. Graly, and Andrea Lini, the University of Vermont; Thomas A. Neumann, NASA; Ben Crosby, Idaho State University; and Dylan H. Rood, Scottish Universities Environmental Research Centre and the University of California, Santa Barbara.