Professor Lee Cronin of the University of Glasgow’s School of Chemistry has been celebrated as one of the UK’s top scientists.

He is one of 10 the UK’s most inspirational scientists and engineers named as RISE Leaders for 2014 by the Engineering and Physical Sciences Research Council (EPSRC). Their contribution to science covers a broad range of disciplines and highlights the diversity and impact of the engineering and physical sciences. 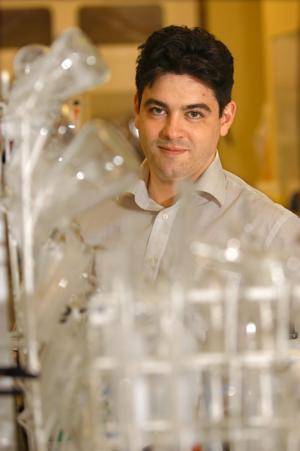 The RISE campaign, in partnership with the Royal Academy of Engineering, was launched by the Science Minister David Willetts in November 2013 to mark the 20th anniversary of EPSRC.

Cronin is Regius Professor of Chemistry at the University. His work as leader of the Cronin Group, which has over 50 members, focuses on the revolutionary potential of complex chemical systems derived from non biological building blocks in the areas of synthesis and self-assembly, molecular devices and complex chemical systems.

Cronin’s work spans the entire range from highly speculative ‘blue-skies’ research to application including the development of inorganic fuels for water splitting, the use of configurable robotics for the programming of drug discovery and novel materials, as well as the ambitious aim of creating life from self-replicating, evolving inorganic chemical cells known as iCHELLs.

Professor Cronin said: “Being named as a RISE Leader is a real honour for me and my research group, and I’m proud that our work has been recognised alongside the achievements of the other recipients of the award. I’m committed to communicating the importance of science on a national and international level and this award will offer tremendous opportunities to expand the scope of this work.”

Universities and Science Minister David Willetts said: “It’s important to celebrate and champion our leading scientists and engineers who are vital to both society and our economy. Their research has a real impact across a range of sectors from manufacturing to financial services. The RISE leaders announced today will help to inspire and encourage others, keeping us ahead in the global science race.”

Chair of the panel and CEO of EPSRC, Professor David Delpy, said: “One of the best aspects of my job at EPSRC has been the chance to meet and speak directly to some of the most exciting, innovative and enthusiastic scientists and engineers in the UK. This campaign gives us the chance to recognise these outstanding individuals, but also to let others get to know them and the great research that they are doing.”
The RISE leaders will now be paired with individuals from government, business or media to communicate the importance and impact of their research, helping their partners to become champions for science.

They will also nominate researchers who are the ‘Rising Stars’, tipped to lead internationally excellent research in the future, and who will go through to the final RISE award ceremony taking place on 10th June 2014 at the House of Commons.

The RISE leaders, their champions and the Rising Stars will join together to celebrate inspiration and innovation within engineering and physical sciences with prizes awarded to the top three Rising Stars.

Follow the journey of the Leaders, Champions and Rising Stars on the RISE pages of the EPSRC website.