A fundraiser who has been struck by cancer three times has been nominated for a courage award by Scottish Television.

Lynn Murray, 48, of Drymen is the founder of the ‘Think Pink Scotland’ charity which has been raising money for a laboratory and equipment in the new Beatson Translational Cancer Research Centre. 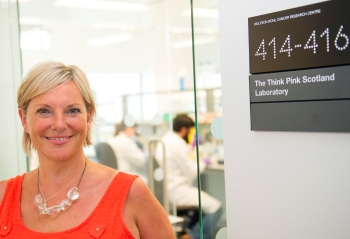 After losing a leg to cancer as a promising 15-year-old swimmer, mother-of-two Lynn was hit by cancer not just once more, but twice. Both times she fought back and decided to play her own part in helping others in the battle against cancer.

Her Think Pink Scotland campaign has raised more than £300,000 for the University of Glasgow through a variety of events and initiatives such as balls, ceilidhs, a recipe book and other merchandise.

The money helped purchase machines that will be used by 10 different research groups at the University and Beatson Institute and will help with the study of breast, colon, oesophageal, ovarian, thyroid, skin and kidney cancers.

Lynn was nominated by her friends for the award in the RBS – Finding Scotland’ Real Heroes competition, run by Scottish Television. The winner will be announced on Friday 15 November on Scottish TV at 8pm.

To vote for Lynn in the Real Heroes competition, visit: http://shows.stv.tv/real-heroes/voting/

To donate to Think Pink Scotland visit www.thinkpinkscotland.org or call 0141 330 8007.