Astrophysicists at the University of Glasgow are looking to the Northern and Southern Lights to expand our understanding of solar flares.

In a new paper published in the Astrophysical Journal, researchers from the University’s School of Physics and Astronomy suggest magnetic waves, which contribute to the formation of auroras on Earth, could help energy from solar flares travel tens of thousands of kilometres in under a second. 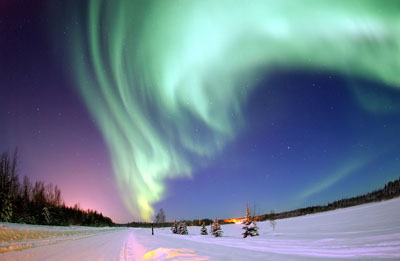 Solar flares are the largest explosions in the solar system – cosmic blasts more powerful than tens of millions of hydrogen bombs which fill the solar system with UV light, X-rays, high-energy particles and vast bubbles of magnetic field and plasma.

Dr Alexander Russell, Royal Commission for the Exhibition of 1851 Research Fellow at the University, said: “When flares occur, huge quantities of energy are transported tens of thousands of kilometres in under a second. What astrophysicists want to know is how does flare energy get from high above the Sun's visible surface, where it is released, down to just above the surface, where it is then radiated into space?

“The current explanation suggests that the flare accelerates electrons to high speeds,  and the electrons carry the energy with them. However, beams of electrons should disrupt themselves if carrying the full flare energy, so we need to find another way that at least some of the energy can travel.”

The answer may have come from one of our planet's natural wonders.

Auroras, commonly known as the Northern and Southern Lights, have an almost supernatural quality, appearing as multicoloured curtains of light shimmering in the night sky.  During auroras, magnetic waves carry energy downwards along Earth's magnetic field.  When this is released at relatively low altitudes of between 100 and 10,000km, it contributes to producing the aurora’s famous vibrant colours.

Dr Russell added: “Our understanding of the auroras on Earth has helped us to build computer models of the solar atmosphere. When we drive these with magnetic waves, the waves carry energy towards the Sun's surface, and cause heating in a low-temperature layer called the chromosphere.  Warming this layer increases its brightness, contributing to the flare.”

The idea that magnetic waves transport energy in solar flares was originally suggested in 2008 by the University of Glasgow’s Dr Lyndsay Fletcher, co-author on the new paper.

Dr Fletcher said: “The heating we find is particularly targeted at that part of the atmosphere that produces visible ‘white-light’ emission. This is an important finding because this region is known to heat during flares but cannot be reached by electrons.

“The Advanced Technology Solar Telescope currently being built in Hawai'i will observe flare white-light emission, so we hope observational studies will make use of our work.  NASA's IRIS space telescope, which will study UV light from the Sun, should also benefit from our findings.

“The University has a proud history of involvement with solar flare research – for example, Professor John Brown’s work on the production of X-rays by fast electrons in solar flares has become a central part of our understanding of these events. We’re proud to be able to contribute to that valuable legacy with this research.”

Dr Russell and Dr Fletcher are members of the Astronomy and Astrophysics group in the SUPA School of Physics and Astronomy at the University of Glasgow. Their research was supported by the Royal Commission for the Exhibition of 1851, the Leverhulme Foundation, STFC and the EC-funded FP7 project HESPE.

Their paper, titled “Propagation of Alfvénic Waves from Corona to Chromosphere and Consequences for Solar Flares”, is published in the Astrophysical Journal.