Emperor penguins benefit from an unusual phenomenon to stay warm during Antarctic winters, scientists at the University of Glasgow have discovered.

Despite living in one of the coldest places on Earth where temperatures can reach -40 degrees Celsius, Emperor penguins retain their body heat not only because of their think plumage and layers of fat but – paradoxically – because the surface of their feathers are colder than the surrounding air.

Using thermal imaging technology on penguins in Adélie Land, scientists from Glasgow’s Institute of Biodiversity, Animal Health & Comparative Medicine and the Université de Strasbourg, were able to determine that the surface temperature of the birds was four degrees cooler than the surrounding air.

The only parts of the penguins warmer than the air were the eyes, beaks and feet – and only the eyes were warmer than freezing. 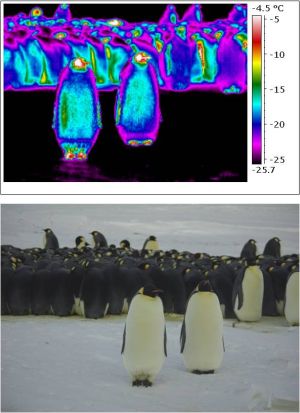 Penguins maintain a core temperature of around 36.9 degrees Celsius when incubating their young and, like any animal, will lose heat to the surrounding air as a result of thermal radiation, when heat from their warm bodies transfers to the colder air.

However, because the plumage is colder than the surrounding air, computer simulations showed this ‘cold coat’ may gain them back a little heat from the warmer air circulating around them. Though this regained heat is unlikely to reach their skin, it could help reduce some of the heat loss from the body by thermal radiation.

“Most of the body that is covered by thick plumage was found to be, on average, four degrees Celsius colder than surrounding air temperature. At first, we were very surprised by this discovery.

“But after analysing the data we realised the key to this is the temperature of the sky.

“A similar phenomenon can be observed if you park your car in the open on a cold night. Usually you will only find frost to have formed on the roof and windscreen but the sides do not 'view' the sky and therefore are radiating to relatively warmer surroundings.

“The same phenomenon explains why fruit can be damaged by radiative frosts when the air doesn't drop below freezing. The difference is we didn’t think a warm-blooded animal could ever have an outer surface temperature that was colder than its surroundings.

“Paradoxically if the penguin plumage is colder than air then it should start to gain heat from its surroundings: think if you were to go into a warm room after being in the cold, your outer layers of clothing would start to warm up from the outside”.

“However, for Antarctic penguins their plumage is so well insulated – insulation equivalent of us wearing two ski suits – that heat will be transferred very slowly to the skin surface. In this way the penguin will remain warm on the inside but the outer surface of its plumage will be extremely cold.”

The findings are reported in the latest edition of the journal Biology Letters.