Biologists have discovered for the first time that the biological rhythms of city-dwelling organisms are changing in response to city living.

Researchers measured the circadian rhythms of groups of urban and rural blackbirds in southern Germany and found that the city-dwellers had faster and less robust internal clocks than rural blackbirds. In the wild, city birds woke up earlier and rested less than forest birds. 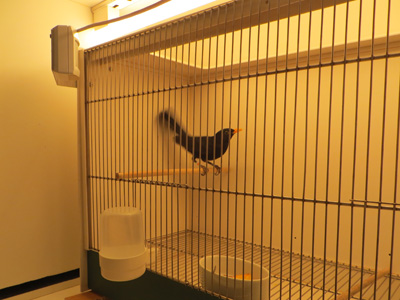 The research adds to a growing consensus that urban environments have a profound effect on the internal clocks of city residents both human and animal. These changes to biological rhythms could lead to increased incidence of health problems and reduced lifespan. Conversely, biological clocks could be modified to better function in urban environment – questions that could be answered by studying wild animals.

The research, the result of a collaboration between the University of Glasgow and the Max Planck Institute for Ornithology in Germany, is published in the journal Proceedings of the Royal Society B.

The researchers captured adult male European blackbirds from the city of Munich and a nearby rural forest. Each bird was equipped with a lightweight radio-transmitter which monitored their daily levels of activity in the wild for 10 days before they were recaptured.

They were then kept in light-proofed, sound-insulated chambers and their circadian rhythms were measured under constant conditions, without any environmental information that could serve as a ‘clock’. In this way, each bird’s own, internal rhythm could be tested. Once the tests were complete the birds were returned to the wild.

Dr Barbara Helm, of the University of Glasgow’s Institute of Biodiversity, Animal Health and Comparative Medicine, said: “The daily cycles of activity and rest are based on biological rhythms which have evolved as an adaptation to the rising and setting of the sun. Our tests were designed to benchmark the internal rhythms of the birds under controlled conditions and to determine a link to the birds’ chronotype in the wild. Chronotype is a measure of an individual’s consistent timing relative to environmental factors - its relative ‘morningness’ or ‘eveningness’.

“We found that the rhythms of urban birds in the wild differ significantly from their forest counterparts. On average, they began their daily activities around 30 minutes before dawn, while forest birds began their day as the sun rose. The city birds ended their days around nine minutes later, meaning they were active for about 40 minutes longer each day.

“In constant laboratory conditions, urban birds’ circadian rhythms were clearly altered, running faster by 50 minutes than forest birds and being clearly less robust. There seems to be a different beat to city life. City clocks were also less persistent, especially in the business district.”

“Previous research undertaken by other researchers has suggested strong links in humans between disrupted sleep patterns and an increased incidence of depression and diseases including obesity and some types of cancers. Our work shows for the first time that that when sharing human habitats, a wild animal species has a different internal clock. We’d be keen to find out the costs and benefits of modifying biological rhythms in blackbirds and other animals commonly found in our cities. This may help us to better understand the challenges of coping with urban life.”

The researchers have raised the possibility that the differences in the biological rhythms could be the result of micro-evolutionary changes in response to the stimuli of urban life such as artificial light and increased levels of noise.

Davide Dominoni, of the Max Planck Institute and an affiliate of the University of Glasgow, added: “For songbirds, early risers may have an advantage in finding a mate and thus a greater chance of successfully producing offspring and passing along their chronotype to the next generation. Other research has shown that chronotypes are highly heritable, so the process of natural selection could mean that city birds are evolving to favour early risers.

“Obviously a great deal of further work would be needed to test this hypothesis but we believe it certainly merits further study.”

The speed of urbanization is accelerating around the world, but we don’t have anything close to a complete understanding of the effects of urban living on humans and animals.

The team’s paper, titled ‘Clock for the City: Circadian Differences Between Forest and City Songbirds’, is published in Proceedings of the Royal Society B. The research was funded by the Volkswagen Stiftung (Initiative of Evolutionary Biology) and the International Max Planck Research School for Organismal Biology.