Heart of space mission cleared for launch by University of Glasgow

Scientists at the University of Glasgow’s Institute for Gravitational Research (IGR) have successfully concluded extensive testing of a vital component of a future space mission.

The optical bench of the LISA Pathfinder (LPF) mission is the super-sensitive heart of a technology demonstrator mission which will pave the way for a future detector to measure gravitational waves. These ripples in spacetime are caused by massively violent astronomical events such as the collision of black holes and the explosion of dying stars. 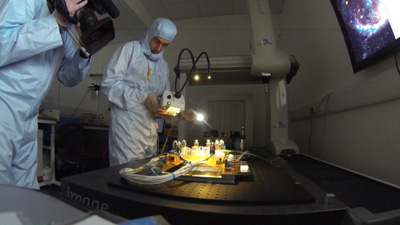 The IGR team in the School of Physics and Astronomy demonstrated that the high-precision sensor system is ready to survive tremendous forces of up to 35 times the gravitational acceleration on Earth during rocket launch.

Dr Christian Killow, Scottish Universities Physics Alliance Advanced Fellow at the University, said: “With these successful tests we have reached an important milestone. The sophisticated laser interferometer performs superbly and is ready for its job in space. We are really excited that the LISA Pathfinder mission is now well positioned for launch in 2015.”

It has now been delivered to Astrium Germany for further integration into the LISA Pathfinder Technology Package. At Astrium members of the Glasgow team performed health checks on the optical bench photodiodes that turn the laser beams into electrical signals, and also micron-level measurement of the beam positions on the photodiodes – a very strong indicator that the bench survived transit unchanged.

Gravitational waves measured by a large mission in space will allow scientists to trace the formation, growth, and merger history of massive black holes. It will also enable scientists to confront General Relativity with observations, and will probe new physics and cosmology.

In order to build the optical bench the IGR scientists, led by Dr. Harry Ward, developed the silicate bonding technique to allow robust, sub-micron optical component positioning – an enabling technology that is now finding additional uses in ground and space based activities, and in both academic and industrial endeavours.