New research has revealed a letter written in 1310 by Robert Bruce to King Edward II, presenting historians with fresh information about a pivotal time in the Wars of Scottish Independence.

The letter was sent less than four years before Robert Bruce won a famous victory at the Battle of Bannockburn against the English king which paved the way for Scottish independence. 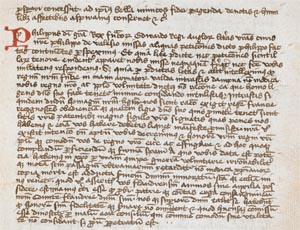 The document, which was discovered in The British Library by chance by a senior academic from the University of Glasgow, gives a snapshot of Bruce in 1310 as a king facing one of his sternest tests yet.

This letter reveals how, when faced with an English army marching into the heart of Scotland, Robert Bruce made an eloquent appeal for peace, on the understanding that Edward would recognise Scottish independence.

Around this time the two men were experiencing very different fortunes; King Edward was growing increasingly unpopular with the nobles in his own court, whilst Robert was slowly reclaiming power north of the border by winning the hearts and minds of the Scottish people. By the time of the Battle of Bannockburn in 1314, Bruce had taken all the strongholds except Stirling and those near the English border.

Dauvit Broun, Professor of Scottish History at the University of Glasgow, who made the discovery, said: “The letter reveals a couple of things: firstly, Bruce’s tone is extremely conciliatory; he seems to be offering to do anything possible to establish peace. However, he is nonetheless plainly addressing Edward as one king to another. There is no doubt that the bottom line here is that Edward should recognise Robert as king of the Scots and the Scots as separate from the English.

“It’s impossible to know if Bruce was serious about keeping the peace, however it seems likely that he would have known that Edward was coming north to escape trouble in England as much as to assert control over Scotland. This could be seen as an attempt at fishing to see how Edward would react.

“The writing of this letter should be seen as a bold move by Bruce who had perhaps recognised that the tables were turning and he could stand his ground in the face of an advancing English army and open negotiations with the king. It allows us a clear sense of Bruce’s terms, which were basically anything as long as Scottish independence is recognised.”

In the end, Bruce’s bold move paid off as King Edward took his army south again to Berwick where he remained until July the next year. The next time he returned north, three years later, he was humiliated at Bannockburn.

Full text of the letter:

Letter of Robert I to Edward II. Kildrum (parish of Cumbernauld), 1 October 1310.

The MS is a ‘scrapbook’ of material chiefly relating to British history, including the ‘Herbertian’ Life of Kentigern, copied by a number of monks of Kirkstall Abbey over a couple of generations, c.1475–c.1525.

Text (punctuated as in the manuscript)

To the most serene prince the lord Edward by God’s grace illustrious king of England, Robert by the same grace king of Scots, greeting in Him through whom the thrones of those who rule are governed. When, under the sweetness of peace, the minds of the neighbouring faithful find rest, then life is adorned with good conduct, and also the whole of Holy MotherChurch, because the affairs of kingdoms are everywhere arranged more favourably by everyone. Our humbleness has led us, now and at other times, to beseech your highness more devoutly so that, having God and public decency in sight, you would take pains to cease from our persecution and the disturbance of the people of our kingdom in order that devastation and the spilling of a neighbour’s blood may henceforth stop. Naturally, everything which we and our people will be able to do by bodily service, or to bear by giving freely of our goods, for the redemption of good peace and for the perpetually flourishing grace of your good will, we are prepared and shall be prepared to accomplish in a suitable and honest way, with a pure heart. And if it accords with your will to have a discussion with us on these matters, may your royal sublimity send word in writing to us, by the bearer of this letter. Written at Kildrum in Lennox, the Kalends of October in the fifth year of our reign [1 October 1310].