Is Scotland still on the rise?

During the last ice age Scotland, like much of northern Europe, was covered with ice. The weight of this huge compacted ice sheet pushed the Earth’s crust down, causing the land levels to sink. Over the 14,000 years since the ice sheet melted, Scotland has been rising an average rate of 1-2mm per year.

New research is using cutting edge satellite technology to examine how parts of Scotland will be affected by rising sea levels over the coming years. 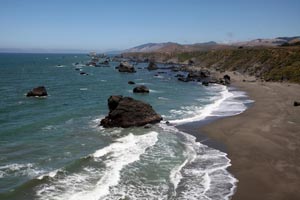 Experts believe that, due to the melting of the ice sheet that once covered northern Britain, much of Scotland’s land has been rising at a higher rate than the sea surrounding it. However, recent studies have suggested that this uplift of the Earth’s crust may be being outpaced by sea level rise, a fact that might threaten much of Scotland’s low-lying coastal areas over the long term.

To answer this question researchers from the University of Glasgow are using the latest satellite radar imaging technology, interferometric synthetic aperture radar (InSAR), to measure the rate of uplift across Scotland, using repeat-pass satellites to track changes in the Earth’s surface that may otherwise go unnoticed.

InSAR technology is capable of measuring land elevation change rates to an accuracy of 1 mm/yr or better, giving researchers the ability to measure changes in land levels in far finer detail than ever before and across a much bigger area.

This project will give us the most accurate picture ever of the present rate of land rise across Scotland as a whole and allow experts to predict its implications.

This research, led by Paul Bishop, Zhenhong Li and Jim Hansom of the University of Glasgow's School of Geographical and Earth Sciences, and co-funded by Scottish Natural Heritage, aims to confirm whether or not Scotland is still being uplifted and, if not, the consequences of that situation.

Professor Bishop said: “It has been assumed that land uplift since the last ice age has been outpacing sea level rise in Scotland. This new study is looking to update this situation more accurately than ever before and on an unprecedented scale.

“The safety net against sea-level rise that has been provided by land uplift may be disappearing, with important implications for the medium and long-term futures of Scotland’s coastal areas and industries”.