Doctoral Researcher receives Prestigious Fulbright Award to the US

Arlene Holmes-Henderson, a Doctoral researcher from The University of Glasgow has received a Scottish Studies Scholar Fulbright Award to enable her to lecture and research at the University of Hawaii at Manoa on one of the most prestigious and selective scholarship programmes operating world-wide.

Created by treaty in 1948, the US-UK Fulbright Commission is the only bi-lateral, transatlantic scholarship programme, offering awards for study or research in any field, at any accredited US or UK university. The Commission is part of the Fulbright programme conceived by Senator J William Fulbright in the aftermath of World War II to promote leadership, learning and empathy between nations through educational exchange. Award recipients will be the future leaders for tomorrow and support the “special relationship” between the US and UK. 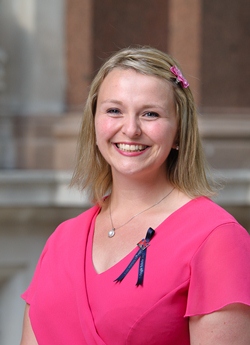 Aged just 17, Arlene Holmes-Henderson matriculated at St. Hilda’s College, Oxford to read Classics. At 21, she began post-graduate research at Harvard University as the Saint Andrew’s Society of the State of New York scholar. She returned to Trinity College, Cambridge where she completed the Post-Graduate Certificate of Education (Latin, Classical Greek, Ancient History and Classical Civilisation). Thereafter, she taught Classics in both Scotland and England while studying for her Doctorate in Education at the University of Glasgow.

Arlene’s teaching excellence has been recognized by the prestigious Teaching STAR award from the Institute of International Education in New York and she has been the recipient of four British Council Comenius awards in recognition of her ambassadorial representation of British education around Europe.

A specialist in Classical and heritage language education, Arlene serves on a number of qualification advisory boards and curriculum design councils and has an extensive list of publications in the areas of language pedagogy and international education.

In Hawaii, Arlene will conduct a comparative curricular study into the revitalization and promotion of heritage language education with a view to making recommendations for the teaching and learning of Gaelic in Scotland.

Commenting on receiving the Award, Arlene said, ‘I am delighted to be the recipient of the Fulbright Scottish Studies Scholar award and look forward to conducting heritage language education policy in Hawaii. I hope this work will enable me to advise the Scottish government on policy measures to stabilize and secure the position of Gaelic in Scottish schools, as well as providing comparative policy data for other heritage languages. As a Fulbright scholar, I will endeavour to be an excellent ambassador for Scotland and for the UK but I am also looking forward to American cultural experiences like basketball games and Thanksgiving!’

The Fulbright Commission selects scholars through a rigorous application and interview process. In making these awards the Commission looks not only for academic excellence but a focused application, a range of extracurricular and community activities, demonstrated ambassadorial skills, a desire to further the Fulbright Programme and a plan to give back to the recipient’s home country upon returning.

Nearly 300,000 extraordinary women and men from all over the world have had their lives changed as participants in the Fulbright Programme. Of these alumni, approximately 15,000 UK nationals have studied in the US and 12,000 US nationals in the UK on Fulbright educational exchange programmes.

The Commission is funded partially by the Department of Business, Innovation and Skills in the UK and the US Department of State, with additional support coming from a variety of individual and institutional partners including many leading UK universities and an annual contribution from the Scottish Government.