Students set to spin web of the future

A team of science and engineering students have developed an innovative ‘space web’ experiment which will be carried on a rocket from the Arctic Circle to the edge of space this week.

The experiment, known as Suaineadh, was developed on a budget of just £30,000 by a team of 20 graduate and postgraduate students from the Universities of Glasgow and Strathclyde and the Royal Institute of Technology in Stockholm. Despite its humble beginnings, Suaineadh could pave the way for the development of a wide range of space construction projects.

Weather permitting, it will be launched from the Esrange Space Centre in Northern Sweden on Sunday 18 March or Tuesday 20 March as part of the REXUS (Rocket-Borne Experiments for University Students) programme, a joint Swedish-German venture.

When the rocket reaches an altitude of approximately 70km, it will eject the central hub section of the Suaineadh apparatus from its nosecone into a low-gravity environment. The hub will release a two-metre-square web, weighted in four corners, which will begin spinning and deploy a rigid structure maintained by centrifugal force. In low gravity, unlike on earth, the structure would be strong enough to act as a foundation for construction, which could be carried out by specially-designed robots.

After several minutes of testing, Suaineadh will fall back to earth. The Suaineadh team hope that data retrieved from its onboard sensors and cameras will validate their design and improve the next iteration of the module. 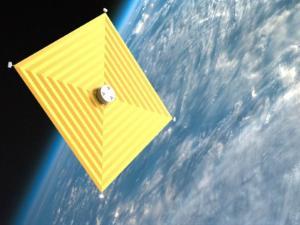 The launch of Suaineadh, which means ‘twisting’ in Scots Gaelic, is the culmination of three years of collaboration between the students in Glasgow and Stockholm. The University of Glasgow team worked on the mechanical design and the actual construction of the experiment, while management and system integration of the project was led by students from the University of Strathclyde.

The team from Stockholm’s Royal Institute of Technology looked after the electronic design and telecommunications.  In 2010, the team successfully bid at the European Space Research and Technology Centre to have the project carried on a REXUS sounding rocket.

Malcolm McRobb, the University of Glasgow postgraduate student leading the project’s mechanical design team, said: “We’re very pleased to see three years of work on Suaineadh come to fruition with the launch of the REXUS rocket.

“This is an important step forward in space construction design. A web such as this, permanently deployed in space, will give engineers a stable and robust foundation for larger structures to be built on. It will also cut down the amount of equipment that each space mission needs to take into orbit, which will bring down the cost of space construction and help make ambitious projects more financially viable.

“It could lead to the development of solar sails to allow chemical-free propulsion, orbital solar panels to generate solar power more effectively, or the development of large-scale antennae to help us learn more about the universe.”

Thomas Sinn, from the University of Strathclyde, said: “I’m proud to have been involved in this ambitious project, and I’m very excited about the launch and the prospect of finally seeing Suaineadh in space.

“Working with colleagues in Stockholm has meant a lot of teleconferences and challenges we hadn’t necessarily anticipated at the outset but finishing the assembly of the hardware was a huge reward in itself.

“We’re looking forward to continuing to develop the Suaineadh design once we can start analysing the data from this initial launch.”

The University of Glasgow team received support from Professor Matthew Cartmell, the University’s James Watt Chair of Mechanical Engineering, who first proposed the concept of the motorised momentum exchange space tether in 1996 and then further developed the idea into a two dimensional web with colleague Dr David McKenzie.

The launch follows last month’s official launch by the Rt. Hon David Willetts MP, Minister for Universities and Science, of the Space Glasgow Research Cluster, a University of Glasgow initiative to create multidisciplinary projects for space-related research and development.

The Suaineadh project was supported by the Advanced Concepts Team of the European Space Agency with two parallel contracts to the Royal Institute of Technology  and the University of Strathclyde.

The REXUS (Rocket-Borne Experiments for University Students) programme allows university students from across Europe the opportunity to carry out scientific and technological experiments on research rockets. The REXUS / BEXUS programme is realised under a bilateral Agency Agreement between the German Aerospace Centre (DLR) and the Swedish National Space Board (SNSB). The Swedish share of the payload has been made available to students from other European countries through collaboration with the European Space Agency.