London 2012 Olympic and Paralympic medals on show at The Hunterian

Visitors to The Hunterian this July will have the unique opportunity to see London 2012 Olympic and Paralympic gold medals before the Games begin.

The University of Glasgow’s Hunterian Museum will be the only venue in Scotland to display the medals which will be on show from 10 until 22 July. Admission is free. 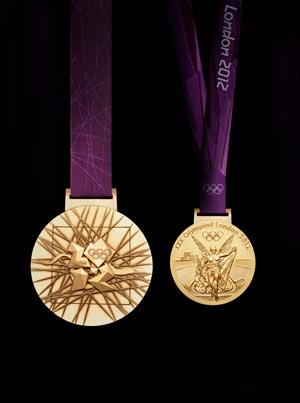 The loan coincides with a new exhibition dedicated to medals in The Hunterian’s Kelvin Gallery. ‘Modern Medals’ opens on 15 July and features almost 1,000 modern art medals from all over the world, showcasing the amazing diversity of this type of miniature sculpture, now recognised as an art form in its own right.

The Olympic and Paralympic gold medals complement the show perfectly and offer a rare treat for both medal enthusiasts and sport fans.

The front of the Olympic medal depicts Nike, the Greek Goddess of Victory, stepping out of the Parthenon and arriving in the host city. The reverse is a modern design symbolising the city of London and competition.

The Paralympic medal features a close-up section of an outstretched wing of Nike, the Greek Goddess of Victory, representing ‘Spirit in motion’ - forward flight, power and lightness - a natural metaphor for the spirit of the Paralympic Games. The reverse represents ‘The heart of victory’ - a depiction of the area close to the heart of the Goddess, symbolically chosen to reflect inclusion and togetherness at an historical event.

Gold, silver and bronze medals will be awarded at approximately 800 Victory Ceremonies across the London 2012 Olympic and Paralympic Games.

The two gold medals have been loaned to The Hunterian by The London Organising Committee of the Olympic and Paralympic Games.

For further information about the Modern Medals exhibition at the Hunterian Museum, contact Harriet Gaston Harriet.Gaston@glasgow.ac.uk or visit: http://www.gla.ac.uk/hunterian/visit/exhibitions/comingsoon/modernmedals/

Images of the London 2012 Olympic medals are available to download from: http://mm.gettyimages.com/mm/nicePath/locog?nav=pr154481657

Images of the London 2012 Paralympic medals 2011 are available to download from: http://mm.gettyimages.com/mm/nicePath/locog?nav=pr156705263

The Hunterian is Scotland's oldest public museum and home to one of the largest collections outside the National Museums. It is one of Scotland’s most important cultural assets and one of the leading university museums in the UK. Its collections have been Recognised as a Collection of National Significance.

The Hunterian is also home to the world’s largest permanent display of the work of James McNeill Whistler, the largest single holding of the work of Charles Rennie Mackintosh and The Mackintosh House, the reassembled interiors from his Glasgow home.

The Hunterian continues in its Age on Enlightenment mission to be a central resource for research and teaching in the arts, humanities and natural and medical sciences, attracting scholars and visitors from around the world.