After almost two years of closure, the University of Glasgow’s Hunterian Museum has been formally re-opened by the Cabinet Secretary for Education and Lifelong Learning, Michael Russell MSP.

At a ceremony on Thursday 15 September, the Cabinet Secretary, who was introduced by the Chancellor of the University of Glasgow, Professor Sir Kenneth Calman, paid tribute to The Hunterian as “not just Scotland’s oldest museum, but one which continues to excite and delight.” 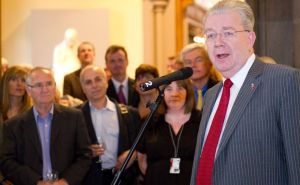 Mr Russell also said that the new permanent gallery at The Hunterian, The Antonine Wall: Rome’s Final Frontier, “provided a wonderful opportunity to see the true scale of one of Scotland’s five World Heritage Sites”, adding that it was “The one that is least well known and perhaps least well understood.

"It is a marvellous exhibition, and the scale and extent of the exhibits on show, from the monumental scultpure to some of the tiniest tools used by those who built the wall are truly astonishing. ”

The new gallery, which is open to the public from today {Friday 16 September} and which is free of charge, showcases  The Hunterian’s unique collection of Roman artefacts recovered from the Antonine Wall, many of which are on display for the first time.

Professor David Gaimster, Director of The Hunterian, who spoke at the launch event, said that, “The Hunterian is delighted to showcase its new permanent exhibition: The Antonine Wall: Rome’s Final Frontier. The new gallery makes a crucial contribution to our appreciation and understanding of the Scottish cultural heritage and acts as a visitor orientation point for the Antonine Wall World Heritage Site. Our new opening hours, including Sunday opening, will allow greater public access to these unique treasures.” 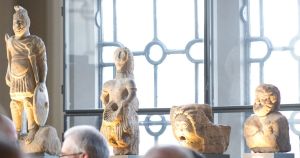 “The University of Glasgow was the first to preserve and present this important chapter in Scotland’s history and has been instrumental in the preservation and interpretation of the Antonine Wall for over 300 years. Through its new gallery The Hunterian aims to continue to improve access and understanding for future generations.”

The Antonine Wall is one of the UK’s most important Roman monuments but its precise purpose and short lifespan remains an enigma. Constructed in the AD 140s and stretching some 60km from the Firth of Forth to the River Clyde, it was the most northerly frontier in the Roman Empire.

This feat of engineering consisted of an approximately three foot high turf rampart fronted by a ditch. It is the second of the two great walls built by the Romans in Britain. Inscriptions on an ornate series of distance slabs reveal that the Antonine Wall was built by soldiers of three legions stationed in Britain, namely the Second, Sixth and Twentieth. A group of nineteen slabs have been found over the centuries and the exhibition brings together the largest group for the first time.

The display has four key themes: the building of the Wall, its architecture and impact on the landscape; the role of the Roman army on the frontier and the life and lifestyle of its soldiers; the cultural interaction between Roman and indigenous peoples and evidence for local resistance and the abandonment of the Wall and the story of its rediscovery over the last 350 years.