For centuries historians have believed that the spark that led to the popular Scottish uprising against Edward I in 1297 was William Wallace’s killing of the English Sheriff of Lanark, William Hesilrig. But new research from Professor Dauvit Broun of the University of Glasgow has raised questions about Wallace’s leadership involving a tangled web of double-dealing and deceit. Did Wallace emerge as the pivotal figure in Scottish resistance to the English by accident and default?

In an article to be published today {14 September 2011} on the website Breaking of Britain  - www.breakingofbritain.ac.uk – Prof Broun reveals that Wallace was not the sole leader of the  band that killed Hesilrig. The deed was as much down to a knight called Richard of Lundie, as it was by Wallace. 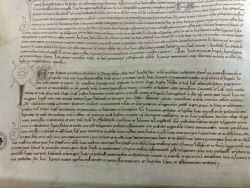 “Richard of Lundie was a close ally of William Wallace and rose with him in opposition to the English occupation of Scotland.  It was Lundie who led the band with Wallace that was responsible for the killing of the Sheriff of Lanark on 3 May 1297. But just a few weeks after this, when it seemed as though the most prominent leaders of the rebellion, including the future King Robert the Bruce, James Stewart and the Bishop of Glasgow, would sue for peace, Lundie decided to go over to the English, presumably to save his own skin.”

His decision to switch sides meant that when the Scots, now led by William Wallace and Sir Andrew Murray, prepared for the decisive Battle of Stirling Bridge in September 1297, Lundie was part of the English force, under the Earl of Surrey.

According to a chronicle of the time, Lundie urged that a detachment be sent over the River Forth to attack the Scots from the rear. Had this advice been heeded, the outcome of the battle might have different from the overwhelming rout that secured the Scottish victory and with it fame for William Wallace. But Prof Broun offers up another, intriguing element to the story: 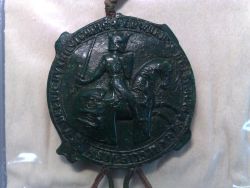 “Nothing is heard about Richard of Lundie after the Battle of Stirling Bridge. But an English song of the time blames their defeat on his treachery. Could it be that Richard of Lundie swapped sides again once he saw the way the battle was going?”

Whatever happened to Lundie it is not hard to imagine how his name disappeared from history. As the myth of William Wallace grew it would have been hard to accept that a turncoat and a renegade such as Richard of Lundie could have been responsible for the slaying of the Sheriff of Lanark that set in train the popular revolt against English rule.

As Prof Broun concludes, “This puts Wallace’s leadership in a new light. It is known that he was co-leader with William Douglas when the English justiciar was attacked, and co-leader at Stirling Bridge with Andrew Murray. Now we can see that he was no more than co-leader at the iconic slaying of the Sheriff of Lanark too. Wallace became the legendary leader of Scottish resistance by accident, by the death, capture or surrender of his colleagues.”

New information on William Wallace and the Guardians of Scotland is the feature of the month for September on The Breaking of Britain website.  http://www.breakingofbritain.ac.uk/blogs/feature-of-the-month/september-2011-the-guardians-in-1286-and-wallaces-uprising-in-1297/

EDITORIAL NOTES
• The Breaking of Britain website is a collaborative project between the University of Glasgow, Lancaster University, the University of Edinburgh and King’s College London and is generously funded by the Arts and Humanities Research Council.
• The Arts and Humanities Research Council (AHRC): Each year the AHRC provides approximately £100 million from the Government to support research and postgraduate study in the arts and humanities, from languages and law, archaeology and English literature to design and creative and performing arts. In any one year, the AHRC makes hundreds of research awards ranging from individual fellowships to major collaborative projects as well as over 1,100 studentship awards. Awards are made after a rigorous peer review process, to ensure that only applications of the highest quality are funded. The quality and range of research supported by this investment of public funds not only provides social and cultural benefits but also contributes to the economic success of the UK. www.ahrc.ac.uk
• The University of Glasgow was the joint top rated University in Scotland in the 2011 National Students Survey, and joint seventh in the UK. www.unistats.com