Men develop type 2 diabetes at a lower Body Mass Index (BMI) than women, according to new research by clinical academics at the University of Glasgow.

The research, carried out with colleagues from the Scottish Diabetes Research Network, helps explain why men have higher rates of diabetes in many parts of the world. 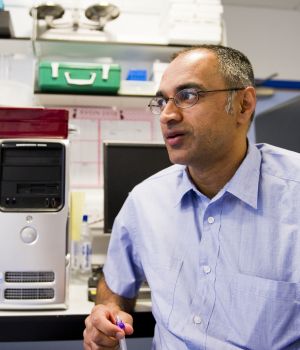 Type 2 diabetes is a condition caused by too much sugar in the blood which occurs when the body’s ability to regulate sugar levels in several different organs becomes disturbed: a process in part linked to excess fat in some of these organs such as the liver and muscles. There are around 2.5 million people in the UK with type 2 diabetes1.

Professor Naveed Sattar, of the Institute of Cardiovascular & Medical Sciences, who led the research, said: “Being overweight is a major risk factor for developing type 2 diabetes although there are many other factors involved too, such as age, ethnicity and genetics”.

“Previous research has indicated that middle-aged men are at a higher risk of developing diabetes than women and one possible explanation is that men have to gain less weight than women to develop the condition.  In other words, men appear to be at higher risk for diabetes”

To test this theory researchers analysed data from 51,920 men and 43,137 women in Scotland with diabetes and compared body mass index (BMI) rates which had been recorded within one year of diagnosis, and the age of the patients. They also took into account other factors such as smoking rates.

The results showed the mean BMI at diabetes diagnosis in men was 31.83 but 33.69 in women. This difference was most marked at younger ages.

Prof Sattar said: “The results from this research confirm an inverse relationship between BMI and age at diagnosis of type 2 diabetes.  But they also confirm our hypothesis that men have to gain less weight to develop diabetes”.

Reasons why women should develop diabetes later than men may be linked to fat distribution.

In general, men without diabetes already carry more fat in their abdominal regions and in their liver compared with women. Women have greater amounts of ‘safe’ subcutaneous fat than men and so the results are consistent with the hypothesis that women need to accumulate greater total adiposity than men to develop harmful fat deposits and produce the extent of metabolic perturbance required to develop diabetes.

Dr Victoria King, Head of Research at Diabetes UK, said: “It is worrying that men develop Type 2 diabetes at a higher rate than their female counterparts. Research like this will help us understand reasons why and provide greater insight into what we can do to improve prevention of Type 2 diabetes.

“Diabetes UK is calling on both men and women to reduce their chances of developing Type 2 diabetes by losing any excess weight, eating a healthy, balanced diet and by taking regular physical activity.”

The research paper ‘Do men develop type 2 diabetes at lower body mass indices than women?’ is published in the journal Diabetologia.

1. NHS Choices website, Diabetes: 2.8m people in UK have diabetes and over 90% of them have type 2 diabetes.