The University of Glasgow has paid tribute to Edwin Morgan, Scotland’s first national poet, who passed away on Thursday 19 August, aged 90.

Morgan was one of Scotland’s most prolific and revered poets, graduating from the University in 1947 to join its staff, progressing through the ranks to become Professor of English from 1975 until he retired in 1980. 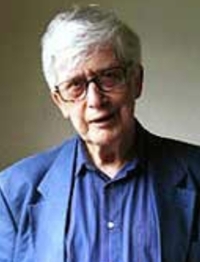 He was appointed the inaugural Poet Laureate for Glasgow in 1999 and Scotland’s first national poet – or Scots Makar – by the Scottish Parliament in 2004, awarded an OBE in 1982 and was winner of the Queen’s Gold Medal for Poetry in 2000.

The author of more than 60 poetry books, Morgan was the last remaining member of the ‘Big Seven’ poets of Hugh MacDiarmid, Robert Garioch, Norman MacCaig, Iain Crichton Smith, George Mackay Brown and Sorley MacLean, and was also respected and admired for his translations of foreign language poems.

“His contribution to poetry and the arts in Scotland and beyond is huge and he will be fondly remembered by a great many people."

Morgan was born in Glasgow in 1920 and was educated at Rutherglen Academy, followed by Glasgow High School. He began his studies at the University in 1937 but at the outbreak of the Second World War he joined the Royal Army Medical Corps before returning to the University in 1946.